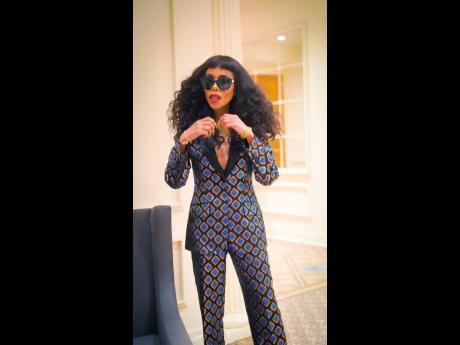 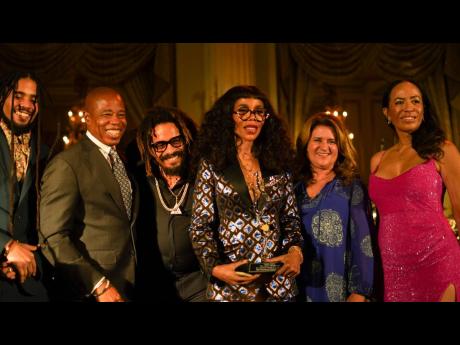 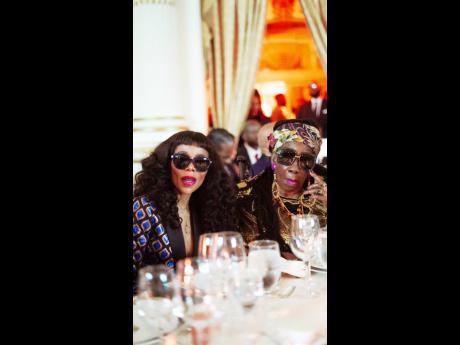 Janet Silvera
Cedella Marley, left, was joined by her mother Rita Marley last Friday at the Plaza Hotel in Manhattan, as she was honoured by the American Friends of Jamaica with the 2022 International Humanitarian Award.
1
2
3

It was difficult to see if she had a twinkle in her eyes, as she wore a pair of dark glasses, but one thing was for sure, the woman who doesn’t travel much these days was there for her daughter.

“I said to her, mom would you like to come, and she said yes,” Cedella, a descendant of reggae royalty, told The Gleaner just before making her way to centre stage to accept the illustrious award.

Dubbed the Renaissance woman, she was recognised for her distinguished impact on service, and when she took the microphone, she thanked her husband, children, her team and her personal hero, her mom.

“As a little girl growing up, I was blessed to witness a true Renaissance queen in action. My mom took care of the family, ran the business with my dad, performed, found time for herself and our community, and did it all so well that she made me think I could do it too. I wouldn’t be here without her. I wouldn’t be me without her,” she professed.

She said her mom taught her and her siblings to use their voices to help others to be seen and heard, and that’s exactly what she is doing. “Our goal is to do so in a way that makes a difference to people everywhere, but it’s also true that charity begins at home, so this acknowledgment by the American Friends of Jamaica really means something to us,” she stated, thanking the AFJ.

A singer, author, fashion designer and visionary entrepreneur, Cedella oversees Marley Holdings, a Marley family entity that manages all aspects of the Bob Marley rights, including the rights to his name and likeness. In addition, she oversees all the Marley-related businesses in Jamaica and is the director of the Bob Marley Foundation.

She is also the ambassador for the Reggae Girlz, Jamaica’s national women’s football team, and her latest venture under the Bob & Rita Foundation, Football is Freedom, has taken off.

“I was surprised when I first learned I was to be awarded, and I am humbled and honoured, because I do what I do not looking for personal rewards. I do what comes naturally,” she stated, admitting that anything that speaks Brand Jamaica titillates her appetite.

Healthcare in Jamaica is a concern of hers and she will be spending a lot of time and effort next helping to build that aspect of the country, particularly to benefit women in rural areas. Already, she says, the Bob & Rita Marley Foundation has been focusing on this quietly.

Last Friday, as the AFJ staged the uptempo gala, the man tasked with presenting the historic presentation, the affable Eric Adams, mayor of New York, spoke of recognising the people who make significant contributions on humankind when they are alive.

“Thank you for all the girls that not only play the sport of soccer, or listen to music, but thank you for showing us a cadre of how we should move to raise what we call the pathway facility,” he told her.

Adams spoke of the sacrifices and the example shown by Cedella, who found sponsorship for the Jamaican female footballers, taking them with her to the next level.

Jamaica’s Minister of Health, Dr Christopher Tufton, who was also present, in his message to the multi-talented daughter of the Jamaican soil, said she has used her talents in service, and there is no question of the need to pay tribute to her for giving back to her country.

Minister of Education Fayval Williams described Cedella as a distinguished fellow deserving of the award.

“She has done tremendous work and has established a ‘Football is Freedom’ initiative, which is aimed at providing tools and resources to grow the sport for women in the Caribbean, Latin America, as well as diaspora communities in the United States,” said Williams in her message.

Williams thanked her for her foresight, business acumen and strident advocacy.

The gala celebrates the AFJ’s 40th years of service in Jamaica, and paid fitting homage to Jamaica’s 60th year of Independence. Over the four decades of service, the AFJ has raised nearly US$20 million and awarded grants to provide well-needed support in education, healthcare, and economic development across the island.

Some early programmes included disaster relief ‘A Thousand Roofs of Love’; combating HIV/AIDS; and assisting the Jamaica School for the Blind and Mustard Seed Communities. Funds raised during the gala will go directly to the AFJ Discretionary Grant Fund and Donor Advised Funds, which are directed to specific programmes.