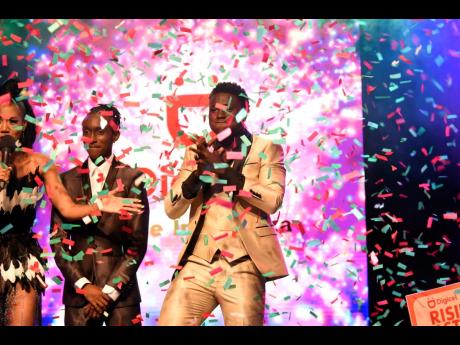 Nicholas Nunes
Mozein Sutherland is the winner of the 2022 Digicel Rising Stars Competition.

Mozein Sutherland, a 17-year-old attacking midfielder on the Camperdown High School football team, is the winner of Season 18 of 'Digicel Rising Stars'.

The announcement was made a short while ago by host Terri-Karelle Reid.

The producer's pick, Sutherland, walks away with $1.5 million in cash, among other prizes, and took the win ahead of this year's wild card, Robert Ewart, who placed second and Oshene Watson, the lone female finalist, who placed third.

As he collected his mega cheque, Sutherland expressed gratitude to his supporters. "Thank you to everyone that voted for me. Everyone that supported me. My parents, the whole Jamaica Constabulary Force. Everybody, the judges. I just want to say thank you very much from the bottom of my heart," he said.

Season 18 of the popular musical competition series saw 10 contestants being selected from video auditions via the Digicel BIP app prior to the COVID-19 lockdown measures imposed by the Government in 2020.

They were narrowed down to three for the first time in the competition's history through public votes and judges television producer, Anthony Miller; singer and broadcaster, Alaine and executive director of the ASHE Company, Conroy Wilson.