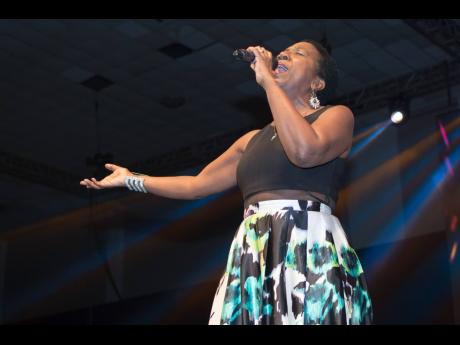 File
The late Karen Smith will be honoured at Sunday’s concert, funds from which will establish a memorial scholarship and refurbish a practice room at the Edna Manley College of the Visual and Performing Arts’ School of Music.

The family of Karen Smith are heartened by the fundraising concert being staged this Sunday by her friends at the Edna Manley College of the Visual and Performing Arts. Funds from the concert will be used to establish the Karen Smith Memorial Scholarship and finance the refurbishing of a practice room at the College’s School of Music.

Smith’s daughter Courtni Jackson, as well as her widower, renowned bass player Jackie Jackson, will join the list of musicians who have given their time and talent, free of cost, to appear in the concert being held at the Vera Moody Concert Hall at the School of Music.

For Courtni Jackson, who is a student at the college, this event represents the impact her late mother had on the people she had met, and she shared that the honour is not lost on her and her entire family.

“I feel so honoured and touched that she has made such an impact on people’s lives, so much so that even a whole year after she has passed, there are persons who feel the need to put on these initiatives in her honour. To have a scholarship in her honour at the School of Music at the Edna Manley College of the Visual and Performing Arts is just amazing.

Smith’s mother, retired educator Barbara Smith, has also thrown the weight of her support behind the fundraiser.

She, too, expressed her thanks and appreciation to the Friends of Karen Smith. They conceptualised the event and the logical connection between Karen Smith and the School of Music at the Edna Manley College of the Visual and Performing Arts.

“Karen was a part-time student of voice at the college while she was a sixth-former in high school. So, it is fitting that students at the school of music should benefit from this concert. We just want to encourage persons to lend their support,” said Smith.

Sunday’s concert will be guided by veteran broadcaster Michael Anthony Cuffe and is being staged under the patronage of former Prime Minister P. J. Patterson. It was originally set to be held September 25 but was rescheduled due to bad weather associated with Hurricane Ian.

This concert is being staged as part of the 45th-anniversary celebrations of the Edna Manley College of the Visual Performing Arts. Although the individual schools (Dance, Drama, Art and Music) existed prior, they were brought under one cover at the Arthur Wint Drive campus in St Andrew 45 years ago.