Three of 18 costume sections to be marketed by Bacchanal Jamaica 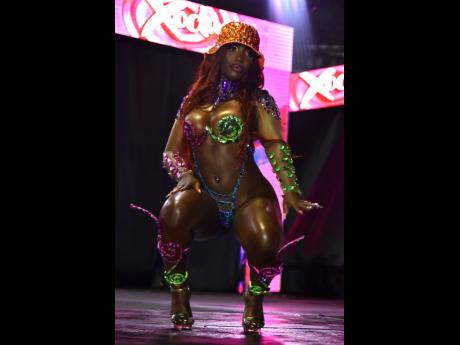 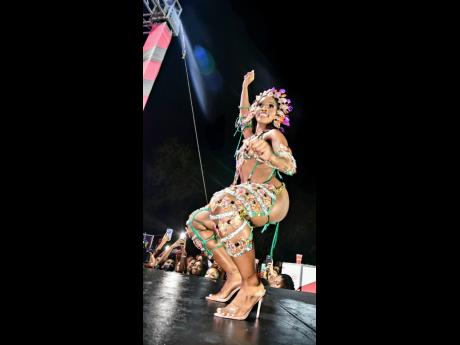 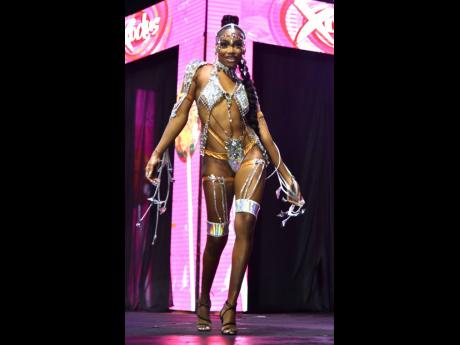 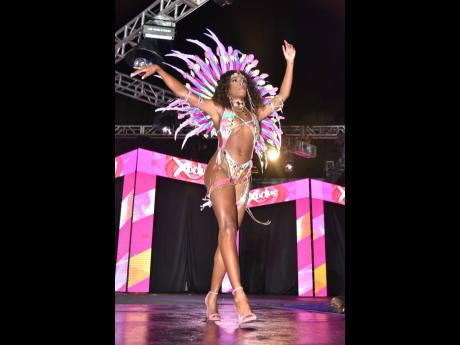 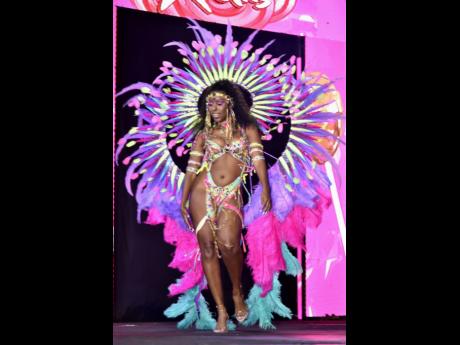 Xodus launched its 2023 band presentation ‘Sweet Treats’ on Saturday night at the Mona Hockey Field in St Andrew. The band, which has been proclaimed the biggest band on the road since it first touched the streets of Kingston in 2017, set its sights firmly on giving carnival newbies and ‘feterans’ a sugar rush of a lifetime, but a few technical difficulties with the sound resulted in delays, which left some attendees feeling slightly weary.

The flip side to this was that people could take full advantage of the candy land curated by the organisers inside the venue, equipped with lollipop swings and popsicle pop art for photo ops, and mill about the bars and food trucks, as they engaged in conversations and made bets with their friends on the potential section names and costs based on the theme selected. Coppershot Sound and Laing D, though obviously frustrated, managed to keep patrons engaged, as well.

The air was misty and the stage was affected by this, but stage assistants made every effort to wipe the stage dry in preparation for the models to strut their stuff in true soca style.

THE SHOW MUST GO ON

The suspense was definitely at a high by 1 a.m. when an announcement was made that some of the costumes would be presented without backpacks, another cause for murmurs in the audience, but to avoid any further delays the show went on.

Eighteen sections designed by approximately 15 designers from Jamaica, Trinidad and Tobago, Barbados and Florida were presented. They tittilated the senses with catchy and complementary names: Sweet Hearts and Milkshake by Shawn Dhanraj; Icebreakers by Alejandro Gomez; Red Whine by Anna Guthrie; Tutti Fruitti by Lila Nikole; Candy Apple by Fon Rose; Sprinkles by Solange Govia of Carnival by Aria; Hard Candy by Shanel Gomes; Juici Fruit and Dulche by Marie Collette; Icy and Honey Dew by Jessica Campbell; Red Velvet and Licorice by David Dewer; Jollie Lollie by Tashanna Hutchinson and Patrice Regis; Pop Rocks by Tracy Boyce of Krave the Band; and Cotton Candy and Skittles which came from designers Ashley Miller and Sherice Dixon, who both presented main stage carnival costumes for the first time.

All the costumes were feminine, sexy and definitely bold – that singularly being a treat for the males in the audience as they watched the models don the different looks. Scott Dunn, co-director of Xodus Carnival, saidd that male masqueraders would have the options to purchase T-shirts and shorts, but did not confirm any male costumes being made specifically for any of the sections.

Miller, a popular TV host and fashion influencer, who is also the production manager at Dream Entertainment (the owners of Xodus Carnival), has been known to put her fingers to work during the carnival season making unique costumes for friends wanting to stand out in the crowd, and also for her skills in wire-bra assembly outside of the season. She said the reason for her proposing a costume for 2023 was her listening to the voice in her head to “take things to another level”.

“I’ve always been into fashion and the small sections I would make for persons around me, always made an impact. Immediately when I heard the ideas for the themes, I knew I wanted to present a section that was soft, delicate, yet sultry and cotton candy screams all of those things,” Miller said.

From a production standpoint, she added, “From our presentation tonight, I would say it is only going to get bigger and better as we enter the carnival season of events, while there is room for improvement, persons should consider jumping with us and we promise even sweeter treats throughout our lead up events.”

Though not clearly defined in the presentation, Bacchanal has assumed the responsibility to market three specific sections, Icebreakers, Skittles and Jollie Lollie, under their brand. One Bacchanal Jamaica supporter, who preferred to be left unnamed described the band launch as “bittersweet rather than a treat”, noting that the partnership is going to take some adjustment for many carnivalists in her circle.

“There’s no denying that the band delivered what it meant to; the costume designs were modern, but still captured the true carnival fashion, but I came with expectations that Bacchanal would be more present. Personally, I thought more soca as we are accustomed to with the veteran band, could have been played by the selectors. It feels as though we are losing a band … but let’s see what both Xodus and Bacchanal havd up their sleeves for the season,” she said.