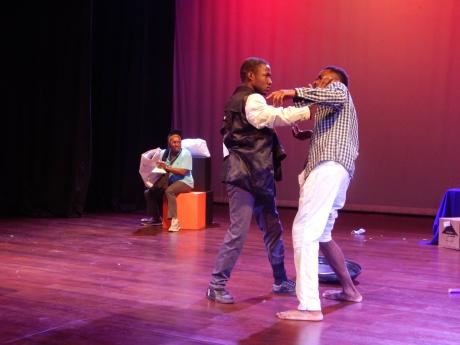 Yet another call has been made on Government to provide Jamaica with a purpose-built centre for the performing arts. It came on Sunday from a leading theatre practitioner – actor, director, educator and performing arts group leader Fabian Thomas.

He was speaking at The University of the West Indies’ (UWI) Philip Sherlock Centre for the Creative Arts (PSCCA) to an audience of, and participants in, the university’s annual theatre competition, Tallawah. It was the closing night and Thomas was commenting on both the importance of a national performing arts venue to the country, and the importance of theatre skills for individual success in a host of careers and vocations.

This was before he, as chief adjudicator, went on to announce the competition’s winners. The other adjudicators were educator-writer-performer Professor Opal Palmer Adisa and former actress Dr Coleen Lewis, who is now more focused on her work as an attorney-at-law.

Among the group participants in this year’s competition – the first since the COVID pandemic struck – were the University Dramatic Arts Society (UDAS), Vocational Training Development Institute (VTDI), Shortwood Teachers’ College, The UWI’s halls of residence and Excelsior Community College. They were vying for awards in the categories including dramatic monologues, poetry, group poetry, spoken word, group spoken word and storytelling.

In welcoming the audience, head of the PSCCA, Michael Holgate, explained that this year’s opening was scaled down and did not include plays, a regular item on the menu since Tallawah began in 1968. This might have been good, he pointed out, since it gave the competitors a chance to concentrate on the basics of writing and production.

Participants were expected to attend all the workshops, which were designed to improve the overall quality of the Tallawah entries.

The competition ran from Wednesday to Friday, with Sunday being devoted to an awards ceremony and the showcasing of The Best of Tallawah, the repeat staging of the major prize-winning pieces.

In his address, Thomas said that Jamaica was in distress because of the twin scourges of COVID and crime. He opined, “We need to heal our heart through our art.”

Tallawah is important, he stressed, as it shows participants how to navigate the world. “The arts is a pathway to every good career – to politics, the pulpit, the stage, if you wish it,” he said.

He touched on a few critical aspects of a production. The creative use of lighting was one, and he pointed out that some of the pieces didn’t have enough. (At least one piece was staged in half-darkness.) “It should be used deliberately and intentionally as part of a show,” he said.

Writing is where the story, the journey, begins, he said. The writer “adds to the dialogue that is current” in society. Those who use pre-existing material should reframe and refresh it, and ask, “How am I adding to the story?” Directors, too, should try out new styles and techniques.

He revealed that the judges would recommend that Tallawah organisers make a distinction, for adjudication, between existing work and original writing by participants.

Actors need to know how to project, he advised, mentioning the difference between a stage whisper, which was meant to be heard, and a real whisper. Even when speaking with passion, he said, actors should not gabble.

Judges gave high commendations and the following ‘Best of…’ awards:

14. BEST DIRECTOR: Jaquon Alexander ( All Arwe a One – UDAS)