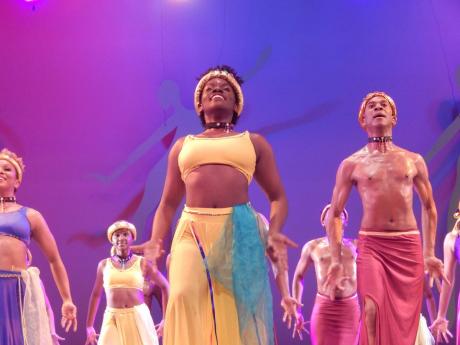 Between 8:15 p.m. on Saturday when the Little Theatre’s stage curtain opened and 10:15 p.m. when it closed, the near-capacity audience was treated to a joy-filled dance show. Yes, there was an intermission between the six dances of the first half and the five of the second, but even that was pleasurable, for patrons were either chatting about the delights of what they had just seen and heard or anticipating the delights to come.

Still, the irony of the production, which closed the following night (to return some time, one hopes), must be noted. The objective of the creators of the joy, The Company Dance Theatre (CDT), was to raise funds for the care of its ailing Honorary Artistic Director Emeritus, Tony Wilson, who had suffered several strokes over the past couple of years.

Happily, he had recovered enough to attend the final rehearsal, The Gleaner was told. The expectation was that he could attend Saturday’s opening of the show, named Legacy in honour of the legacy Wilson has provided to the CDT.

Of course, in doing so, Wilson, founder of CDT’S parent company, The Company Dance Theatre, has also given to Jamaica as a whole “dynamic, highly technical, cutting-edge modern dance”. That was the sort of top-quality dance seen in the weekend’s production.

If that CDT description of their work suggests a shying away from narrative dance, the reader might not be surprised at the absence of narrative dance from the show. For me that was a cause for regret. My favourite Company Dance Theatre work is Wilson’s ‘Rose Hall’ (2011), based on the notorious, quasi-legendary White Witch of Rose Hall, Annie Palmer, and her lovers.

All but two of the dances were costumed by their choreographers and, intentionally or not, the costumes started out as basic – think two-piece bathing suit – and got more and more elaborate and lovely as the evening wore on. My favourite dance, ‘Wilson’s Calabash’, ended the show with the prettiest costumes, which were designed by Wilson.

Another of his dances, ‘The Journey Continues’, opened the show, at his request. Considering its theme, and the idea of a calabash containing stuff that has been gathered, the positioning of the works made sense.

While the pure dancing – the performers’ movement to music, using virtually every part of their body around every inch of the stage, and in a variety of juxtapositions with one another – had the greatest visual appeal, it was greatly enhanced by Nadia Roxburgh’s varied, sensitive lighting. Also giving variety to the visuals were two videos of dancers in fields, ‘Just a Long Way’ (2022) by Bully and ‘D’Illusion’ (2022) by McDonald. Though they did provide variety, as dances they were not as interesting as the ones on stage.

The poignancy underlying the production was heightened by the director’s notes statement by Artistic Director Bully, who as a pre-teen danced her heart out when auditioning to join Wilson’s dance school and later became, at 13, the youngest person ever to join his company.

When she graduated from university as a medical doctor and told Wilson she was heading to the USA for just a year to dance before coming back to Jamaica to start practising medicine, he predicted that she would not return. She noted that while she has not returned permanently, she did return to establish the CDT.

Addressing Wilson, the beloved “Sir,” her Notes state: “…for you, Sir, I came back: back to continue your legacy, back to inspire and nurture young talent the way you nurtured me, back to give dancers a safe space to be themselves and express who they are, and back to give them a stage to dig deep on, and reach their full potential as artists.”

Legacy was a great début show for the CDT. Long may it last.