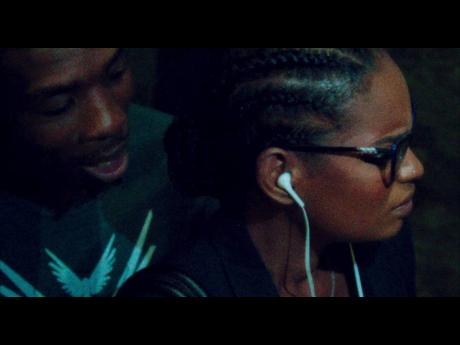 Contributed
Actor Cornelius Grant (left) in a scene with Pepita Little in a scene from the Watooka Films horror production ‘Nice Lady’.

On Sunday, December 4, patrons can bring their towels and blankets for the GATFFEST film pitch event under the stars, where 10 film pitches will be judged. Patrons will also be able to enjoy a special screening of A Touch of Sugar, directed by Vennessa Hanshaw, 2020 film pitch winner, and Mark Anthony Deacon; as well as the film, Nice Lady, directed by Kaiel Eytle.

The event is free.

This is the second staging of the GATFFEST Film Pitch Competition. It allows contestants five minutes to pitch their best ideas to a panel of judges. One professional film-maker and one first-time film-maker will get the funding to make the films which will premiere at GATFFEST 2023 in June. GATFFEST organisers received almost 30 entries and selected the top 10, five in each category of professional and first-time film-makers. Of those 10 finalists, two persons will end up with a grant of $850,000 each to produce the films.

Savannah Peridot, GATFFEST festival director, explained. “One of the main goals of the GATFFEST Film Festival is to aid in the development of the local film industry, so we are excited that we have been able to have this event again for the second time. We are very proud of this initiative to provide some well-needed financial support for our local film-makers, and we hope to be able to sustain it every year, going forward.”

The pitch competition was launched in June 2019, the final activity of GATFFEST’s inaugural film market, an element adopted from established international festivals to facilitate exchange and networking among film-makers, producers and potential distributors. The inaugural competition was facilitated by the UWI Community Film Project with the support of the Bob and Rita Marley Foundation and Jamaica Social Investment Fund.

Three emerging film-makers were the recipients of grants totalling $1,850,000 to complete three short films. A Touch of Sugar, which had a budget of $1 million provided from the Film Pitch Competition, premiered at the GATFFEST Film Festival earlier this year.