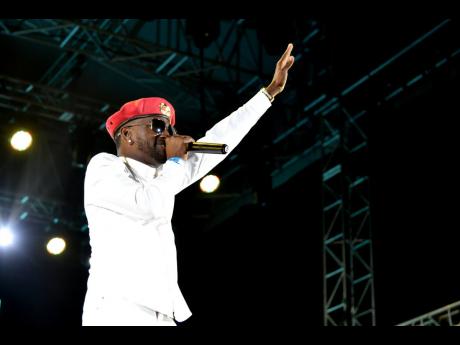 When it comes to Sting, Ninjaman is the real OG. The Don Gorgon, who has dominated many a Sting stageshow over the years, may be behind bars, but he was very much present at Sting 2022 - The Return.

Singer Ras Ghandi came to Sting proclaiming that he was there to “entertain, educate and teach at the same time and also to play a special voice note from one of the biggest artistes this industry has ever seen”. That artiste was Ninja. “All a oonu who know seh a Ninjaman set this ... Sting ... mi want hear oonu seh ‘Gorgon!’,” Ghandi requested prior to playing the voicenote.

When he pressed ‘play’ from his cellphone, Ninja was heard telling the singjay to “run tings”.

“This is the original front-teeth, gold-teeth, gun-pon-teeth, brush-teeth-with-toothpaste, Don Gorgon,” Ninja said in his introduction and he named out the artistes who he had “given the road to run”. Among those listed were Shabba Ranks, Bounty Killer, Cobra and Spice.

Ninjaman, whose real name is Desmond Ballentine, was sentenced in 2017 to serving life in prison for the 2009 murder of Ricardo ‘Ricky Trooper’ Johnson. Ninjaman, 56, will be eligible for parole after serving 25 years.

“A me alone can get dem voice note deh ‘cause me a one special person. That person deh inna good spirit. A one gorgon and dem cyaan go round that. I wrote songs for him, and still writing songs for him. But some things we can’t disclose. Sometimes we just stay behind the scenes and mek things happen,” Ghandi said in an interview post-performance.

Ghandi, who now resides overseas, said that he had to be present at Sting this year.

“Sting brought me to Sting. This stageshow was absent for seven years and we can’t deny it, Sting has played a big role in our dancehall culture in Jamaica and it is every youth’s dream to perform at Sting. Although this is not my debut, this is something that I would not mek the opportunity pass. After six years, this is also my first Christmas in Jamaica, so it’s very special being here,” he explained.

Ghandi’s performance was short and sweet. Although he declared that Ninjaman is his “father”, this was clearly a case of chips falling far from the block, because, whereas Ninja is known for his controversial, gun lyrics, Ghandi’s performance was anti guns, violence, thugs, gangsters and politics. And, like a typical old-school artiste, Ghandi found time to big up Mama with the song Message to Mama.

“Plantation Cove, mi love bun fire and we love tun on stove. I go by the name of Ras Ghandi, who don’t know me a go know me tonight,” he told the Sting crowd when he entered centrestage, looking militant in pristine white and rocking a red beret.”Mi look clean don’t? Den nuh Christmus ...? Man fi sharp.”

The Far East, Real Rock and Punany were his ‘riddims’ of choice as he selected songs from his catalogue.

Ras Ghandi, whose real name is Duaine Bowen, is a revolutionary singer, songwriter and deejay who has been writing and performing since the age of 12 and cut his first recording at 16. Seen as a role model to many, especially those from his community of Gregory Park in St Catherine, Ras Ghandi continues on his journey to inspire and uplift youths. He is the father of the reigning Miss Jamaica Festival Queen, Velonique Bowen.