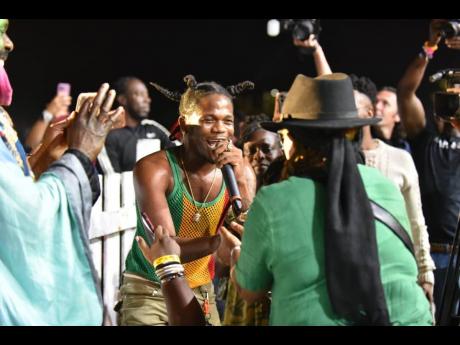 Kenyon Hemans
Dancehall artiste Jahshii moved into the crown to serenade the audience.

After a passionate performance on the Rebel Salute stage during which he decried the rising rates of violence in Jamaica, dancehall newcomer Jahshii receives high praises and endorsement from talk show host, educator and poet Mutabaruka who served as co-host for the show.

“A the first me a meet you enuh Jahshii and mek me tell you something, in front of the thousands of people wah deh right yasso. Mi know seh Rebel kinda tell yuh seh do a different kind of show than what you usually do, but yuh see wah yuh just do, a while ago, I don’t want you tek it lightly enuh. You can perform enuh, but you see wah yuh do a while a guh is more than [a] performance, and I would hope that is not because Rebel seh don’t do what you usually do and do another thing,” Mutabaruka said.

“Me see seh a from yuh heart and mi glad seh a from yuh heart but I doh want yuh lef yuh hear right yasso. I want you to carry yuh heart go which part yuh come from because a serious thing yuh just do a while a guh fi even come pon the show and yuh never deh here long. A just 15 to 20 minutes yuh come and wah yuh do right yasso bigger than most of the shows weh yuh do where thousands and millions of people deh. Me a tell yuh as Mutabaruka seh trust me brethren, don’t lef yuh heart a deh show ya, carry it go wid yuh back a yuh yard and [with] yuh brethren dem weh yuh call dawg,” he continued.

Jahshii, clearly in his element, left the stage during his performance and roamed through the crowd delivering an emotional rendition of the track Born Fighter. He declared on many occasions that it takes real hard work and determination to make dreams become a reality and that the realities of living in Jamaica are sometimes hard to face. Mutabaruka used the opportunity to chime in and say that the music can be used for transformation.

“Music a [di] most influential thing right now. No politician, Andrew Holness coulda talk lickle more. The music a twist the yute dem one way different. So you see if di yute dem can come forward and realise seh it nuh mek no sense, and you can’t tell a man fi do something if him nuh reach. Cause him affi reach fi do wah him a do. But hear wah now it cyaa gwaan so Rasta. More murders commit inna Jamaica per million than inna America, and America is a continent. How that possible? Everything responsible, including the music,” he explained.