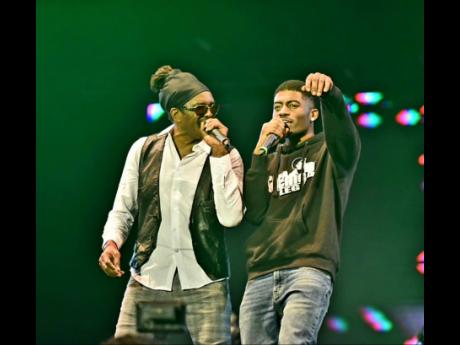 Rebel Salute is known for being a family-oriented show, and helping it to live up to that was veteran deejay Papa Michigan, who used his 20-minute set on stage to give his son Ramesh his big stage debut.

"Would you believe seh is 45 years mi spend inna the business? Still look like 45, right? Right now, I want to bring out my son. His name is Ramesh. Clap him man and make him feel welcomed. This is the first time he is doing this," Papa Michigan said to the crowd.

Clad in black, the 24-year-old confidently took the mic and addressed the crowd, noting that his name is one to be remembered, before paying tribute to the late Joseph 'Jo Mersa' Marley, the son of Stephen Marley and grandson of Bob Marley, who passed away in December.

"Big respect to my father for bringing me out here. My name is Ramesh, write it down and don't forget it. I got a quick tribute to Jo Mersa, a quick little piece for him. Condolences goes out to [his family] and everyone that has lost a loved one recently, condolences goes out to you guys," he declared.

Though he fumbled some of his lyrics during his performance, his father was there to help lift him up, reminding him that the first time on stage is never really easy.

"Alright, the first time me go on mi did very shy, you understand me. Plus, he is going on this big Rebel Salute [stage], seeing all these sexy girls. Since you nah sing da one deh, you figet it, mi nuh know, let me see if you know one of your father's song," Papa Michigan said.

Then they both gave a rendition of the tune Mary Mary, Quite Contrary.

Ramesh thanked the audience for having him, after which his father declared that the younger generation was up-and-coming.