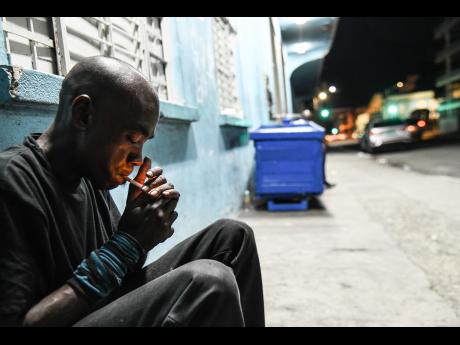 Ricardo Makyn/Chief Photo Editor Lionel Johnson, 47, lights a cigarette while sitting outside the Kingston and St Andrew Municipal Corporation temporary night shelter on Church Street. Deported from New York almost two decades ago, Johnson said he has no relatives here in Jamaica. He said he was shocked to hear about the brutal attacks on the homeless that left four dead and two injured.

The imagery of anybody being chopped to death is gruesome, but more worrisome is the fact that these acts of violence were meted out on some of the more vulnerable in our society. The atrocities were not lost on The Gleaner.

Streets filled with trembling as four chopped to death in Kingston

The cold, haunting streets of Kingston were frozen with fear on Monday night as the capital’s nomads snuggled in corners or retreated to shelters in the aftermath of the grisly murders of four homeless men and the wounding of two others.

The macabre scenes spanned an arc of 9.5km (6.0 miles), stretching from the shopping strip of Half-Way Tree to downtown and further west near Bumper Hall.

Kingston Mayor Delroy Williams called the incidents a “stain” on the nation – a contrast to what he viewed as improving relations between the public and the homeless population.

While attacks, even deadly ones, on homeless persons occur occasionally, Jamaicans awoke to a scale of carnage to the city’s vulnerable as infamous as it was horrific.

The police said their probe into what appeared to be coordinated attacks was ongoing as they pursued several leads. Some of downtown’s homeless who spoke to journalists believe that one of their own might have been responsible for the bloodbath.

The investigations might also delve into questions of whether the savagery was the work of a serial killer. It is uncertain whether the acts were committed by a single person.

Barrington Hall bemoaned the murder of his soulmate and friend ‘Soljie’, one of the four men killed in the streets between Sunday night and Monday morning. Soljie met his demise on the outskirts of the civil and tax division of the Kingston and St Andrew Parish Court – chilling irony of the injustice that befell him.

Hall, who has been homeless for years and regularly hangs out with Soljie, mused that he might have suffered a similarly bloody fate if he had slept near his pal on Sutton Street as usual.

“Dem say me miss it. I sleep out here. Me and she, too,” Hall told The Gleaner, referencing a nearby homeless woman.

“We talk about woman and thing and we smoke, enuh … . Sometimes I beg him a draw or I buy my own and ting, yuh know. Otherwise he was just a friend.”

Two deceased were found on Hanover Street in the Kingston Central Police Division and a fourth in Kingston West in the vicinity of the Mother White Bridge.

The injured men were found at a Constant Spring Road plaza and on Derrymore Road in the St Andrew Central Police Division.

A resident of central Kingston who lives in the area where the downtown murders occurred told The Gleaner on Monday that the attacks were an indictment on the State and the people of Jamaica. He was seen busily covering bloodstains with sawdust.

“Homeless people are being murdered on the streets and not being protected by the citizens and the State, especially in COVID time.

“If they were allowing people on the street over time, maybe somebody would see the act and try and stop it,” the man, who requested anonymity, said, hinting at the nightly islandwide curfews that run from 10 p.m. to 5 a.m.

Another resident, Marlon Carter, was more concerned about the attacker and the motive.

He theorised that the modus operandi was consistent with the threats issued by a mentally ill man who roamed central Kingston.

“He was here before, but him come back about two weeks now. Every madman afraid of him. He is insane and threatens people before him attack,” he said.

The police could not confirm whether that person was a suspect.

Security personnel at the Poor Relief Department in Kingston indicated that arrangements were being made to accommodate as many homeless persons as possible overnight.

There are an estimated 2,000 homeless people in Jamaica, around 700 of them in Greater Kingston. The capital’s downtown region accounts for about 500 of them.

Lionel Johnson was among a few lonely souls who battled the chill on a Kingston sidewalk Monday night.

The 47-year-old deportee from the United States has no family and was fearful of what the night held for him on Church Street.

“While these are clearly horrific and criminal acts, I am left to wonder if this is the outcome of an outburst of madness. It challenges me to do even more for our homeless population,” McKenzie said in a statement.

Opposition Leader and PNP President Mark Golding called for immediate action to be taken by the Government in response to the killings.

“This morning’s (Monday’s) incidents are further evidence of the severity of the crisis of violence in our nation, where Jamaica has become a place in which our most vulnerable and defenceless can be so heartlessly attacked and murdered in our capital,” Golding said.