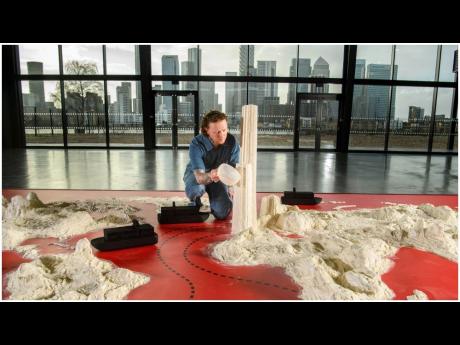 A map of the world has been created with flour to highlight cocaine use.

The map has been created by Nathan Wyburn to mark the launch of the NOW TV series 'ZeroZeroZero' and is constructed from flour – the street name for the drug.

161kg of flour has been used to reflect the amount of cocaine consumed in London each week whilst peaks on the map represent high amounts of use in Barcelona, Berlin and Amsterdam.

The new drug-trafficking TV series is based on the book of the same name by Roberto Saviano and stars Andrea Riseborough, Dane DeHaan and Gabriel Byrne.

Commenting on the installation, Wyburn said: "I’ve worked with all manner of unique ideas and mediums over the years. This intricate piece for NOW TV has been incredibly interesting to design but it’s also harrowing to see such shocking statistics piled high in flour form."