Crocodile enters the OR with undigested shoe 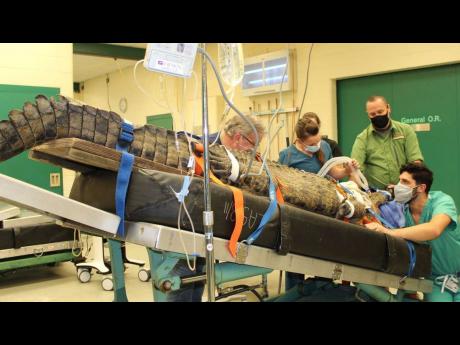 A crocodile has had an operation to remove a shoe from its stomach.

The reptile was brought to the University of Florida College of Veterinary Medicine earlier this month after swallowing the shoe that fell from a zipliner's foot in the US state.

Vets revealed that the crocodile had initially thrown up the shoe before eating it for a second time. When the vets were unable to get the animal to vomit once again, they decided to conduct gastrotomy surgery to remove the footwear.

Images and a video of the procedure was shared on social media with the reptile, named Anuket, being kept at the facility overnight for supervision.

The operation proved to be a success and Anuket is now back in his enclosure at the zoo.