Marilyn Monroe, one of the famous names of the past to grace Jamaican shores 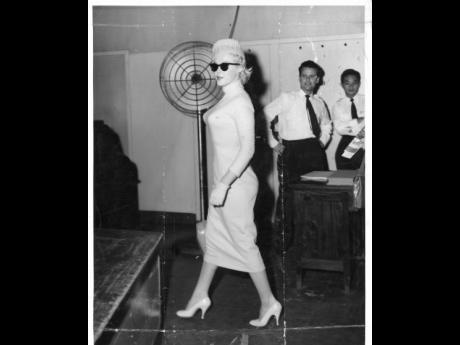 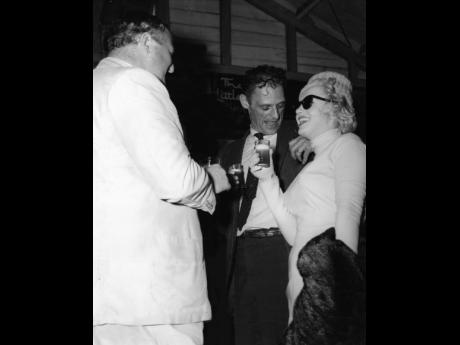 Marilyn Monroe was easily the most famous woman in the world when she decided to, like many a celebrity before her, visit the Island of Jamaica in 1957. The Gleaner’s pages captured the moment brilliantly. Have a read.

THE rain yesterday had tapered off to a drizzle by mid-afternoon. When the Avianca plane touched down from New York and the door swung open, the sun was out; but, even its beams were put in the shade as they picked up the golden girl who stepped out.

Marilyn Monroe, swinging a hip into position for photographers as she poised for a moment on the gangway, had arrived in Jamaica. Behind her, tall and a little harassed-looking, was husband-playwright Arthur Miller. Still further behind were Mr. and Mrs. Morton, cousins of the dramatist.

Chewing her stick of gum, Miss Munroe elegantly undulated across the tarmac to be processed and to make the procedure even smoother, to be given a rum punch, her first introduction to the island itself. (Arthur Miller: ‘I passed through here once on the way to Haiti’).

The Miller’s are to rest at Ocho Rios for a fortnight. They have rented a house and it is rumoured are planning to buy one on the celebrity-studded North Coast.

The star, who first rocketed to fame on the strength of a nude picture on an almanac, has just completed filming with top British actor and director, Sir Laurence Olivier. She said nothing about him, but the emphasis has been shifted slightly. Their film “The Sleeping Prince and the Showgirl” (Arthur Miller: ‘I don’t know why’).

Miss Munroe has her own production company but she says she doesn’t know yet what her next aim will be. Although it was reported some time ago that she was campaigning to play in the screen version of the Russian Classic, “The Brothers Karamazov”, a question on the subject made her avert her attention swiftly and fix her eyes – hidden behind the customary dark glasses, on an infinitesimal spot somewhere on the airport ceiling. (Arthur Miller: ‘Yes, I am writing a play for her. It isn’t titled yet. It will be about contemporary life’).

Miss Munroe’s famous figure substantiated all publicity handouts. She was sheathed in an anatomy-hugging neutral beige dress and she wore a little Russian-Inspired hat. She carried herself erect. Arthur Miller looked the typical creative writer type, ruffled hair, careless looking flannels and sport coat, nigh feet. His tortured face seemed very tired. (Arthur Miller: ‘After the plane, I can hardly hear anything’).

“Mr5. Miller”, asked someone, “How do you like having a wife so much in the public eye?” “It’s only at the airports”, he cracked.

“Miss Munroe, if you had to choose between your husband and your career which would you pick?” “I don’t have to choose”, breathed Mrs. Miller, “But, if I had to, my husband”.

“Come”, said Mr. Miller, “We’ve got to get over there (Ocho Rios) in two hours”. They prepared for the customary dash towards the car. Miss Munroe carefully combined it with a lilting sway of the hips. They got in. She is in the middle, protected on either side by the other Mrs. Miller and her husband.

The car, suitably enormous to convey Miss Munroe, didn’t move. A lot of luggage has to be stowed on top. Miss Munroe began her autograph-signing chores. Mr. Miller, by this time in short sleeves, got out of the car, put on his jacket, then took it off again. He mopped his brow. Morton Miller strayed nearby. His wife sat patiently next to Miss Munroe between her and the crowed of staring eyes.

On the other side, the car door was left open by Mr. Miller. The famous legs, encased in the most transparent of stockings, were on the view. An amateur photographer climbed into the front seat and flashed his bulb. Miss Munroe, caught unawares handing back an autograph, smiled. Every now and then, she fanned herself with a thick little, intellectual-looking book. (Arthur Miller: “We chose Jamaica because we thought it wouldn’t rain”).

The luggage was stowed by now, the passengers settled themselves and the car eased gently off on its journey to Ocho Rios.