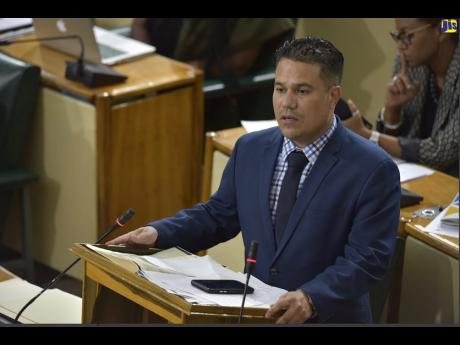 Contributed Matthew Samuda, minister without portfolio in the Ministry of National Security.

This week The Gleaner again looked at the issue of abuses in the nation’s prisons. But this time around, the organisation, took a deep dive into Minister without portfolio in the Ministry of National Security, Matthew Samuda’s response. Still not enough?

What of the report by Justice Sykes’ group?

MATTHEW SAMUDA, minister without portfolio in the Ministry of National Security, who has oversight of the island’s prisons and remand centres, has been doing a good job deflecting criticism that the Government might have received for a series of bad reports on the poor conditions in these facilities.

Mr Samuda is effective because he is not being defensive. He has neither ascribed motive to the agencies that conducted the reviews nor claimed that the conditions are legacies of previous administrations, which tends to be the default position of politicians. He acknowledges the problems and signals the intention of the Holness administration to, within the fiscal constraints, do all it can to correct them. That was the tactic he adopted in the Senate last week in his statement on the findings of the Independent Commission of Investigations (INDECOM) of a culture of abuse at the Rio Cobre Juvenile Centre in St Catherine.

“The report does not make for easy reading,”he said, adding that the transparency he promised on taking office demanded that the facts be presented even when they are inconvenient or discomforting.

It was in that vein, too, that he promised to also bring to the Parliament “soon” the findings of an audit, by his ministry, of the circumstances of the case of 81-year-old Noel Chambers, who, before his death last year, spent half his life without ever being convicted of a crime. Accused of murder, Mr Chambers was deemed unfit to plead, then fell through the cracks of the justice and prison systems. Mr Chambers’ case, and similar ones, and pictures of the octogenarian’s emaciated body in death became symbols of the worst of Jamaica’s treatment of prisoners.

This newspaper agrees with Mr Samuda that the state of the country’s finances, including a J$300-million cut in the Department of Correctional Services’ budget for the fiscal year ending March 31, is a severe constraint. However, fixing problems is not all about throwing money at them although that is sometimes required. Sometimes, much can be achieved with administrative action, leading to improved functional efficiencies.

That is why, while we appreciate the minister’s nod to transparency and welcome the administration’s decision to make public its own report of the Noel Chambers affair, we remain concerned that the administration has hardly acknowledged, at least publicly, the findings of a task force – set up by Chief Justice Bryan Sykes – into the Chambers matter.

The recommendations of Justice Sykes’ team of judges, lawyers, correctional services administrators, and health professionals were published last October. Many of them do not require a lot of money to implement. Indeed, some only need amendments to legislation and administrative action. They propose, for instance, simplifying the process of determining who is unfit to plead and that courts be given greater power to divert people with mental illnesses who are in conflict with the law to care facilities outside of prisons.

Having a designated forensic psychiatric facility for mentally ill people who come before the courts, which is another of the task force’s recommendations, may be more difficult. A short-term measure is, perhaps, converting a wing of the Bellevue Hospital for this purpose. That cannot be beyond us.

A long-term fix, given Jamaica’s worsened economic straits because of the COVID-19-induced recession, might be the administration swallowing pride and walking back its decision of naked political calculation and re-engaging Britain in its offer of £25 million to help build a new, state-of-the-art prison. That offer was tied to an agreement that Jamaicans, nearing the end of their sentences in UK jails, who would likely be deported anyway, be allowed to complete their time in Jamaica.

First spurned by Prime Minister Andrew Holness when he was in Opposition in 2015, it was rejected because going into an election, it was good politics to say, in front of Britain’s then prime minister, that the UK was offering jails rather than schools. Yet Jamaican prisoners, as Mr Samuda would concede, mostly live in dehumanising squalor.

There are many legitimate matters of concern in the British offer such as which prisoner would qualify for the scheme and the terms under which the prisoner would be exchanged. But those are questions that could be negotiated among self-interested parties. Maybe Mr Samuda should be mandated to reopen those negotiations, with the proviso that Britain add a forensic psychiatric facility to the deal.