Black and white memories of a terrible morning 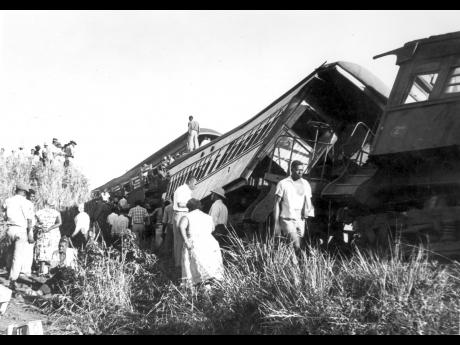 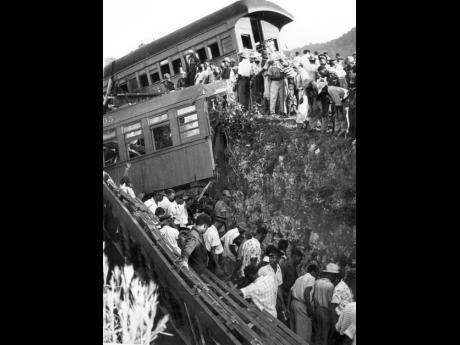 The Kendal train crash is remembered mostly in terms of statistics but when one flips through the pages of the September 3, 1957 edition of The Daily Gleaner, the story in black and white brings a kind of deadly colour to those memories.

WHOLESALE death and disaster rode the rails to Kendal last night. By midday today Jamaica's worst railway accident by far and one of the gravest in world railway history had reached at least 171 — 159 bodies removed from the scene to Mandeville mortuary, and three deaths from injuries at Mandeville Public Hospital and nine at Spaldings - with an estimated 600 to 700 injured.

About eleven o’clock last night, a train consisting of two diesel engines ahead of twelve wooden coaches crowded with passengers, reportedly about 1,600 the majority members of a day excursion organised by St. Anne’s Catholic Church, Kingston and led by the Rev. Father Eberle, S.J., was approaching Kendal, a small station prior to Williamsfield, on its way back to Kingston from Montego Bay.

The train was coming to a bend in the line, witnesses say at considerable speed, because the coaches were swaying and actually passing through a narrow cutting in rock, when there was a terrible jolting and swaying likened to an earthquake, and eight of the coaches were wrecked.

The brakes were either not applied or failed to act, since the engines came loose from the train and ran on for about a hundred yards. Of the remainder, five toppled into a gully beside the tract, two remained in the cutting, one mounted its bank, the one behind was raised up to that its body came off the undercarriage and the front wheels were lifted off the line.

Most of the passengers in the four rear coaches escaped unharmed but for shock and minor injuries such as cuts and bruises. The remaining coaches were an utter shambles, with dead and injured inside and underneath them, survivors screaming, calling for help or crying the names of relatives or friends.

Of the derailed coaches in the gully, one was smashed to silvers, with the wheels lying to one side: another was a mere strip of smashed boarding lying partly on the wheels, partly on the roof of another coach lying at an angle and on its side; the next had broken in unequal parts, the larger (forward) section lying on its side, the smaller still on the line and coupled, but stripped of root and sides; the last had its inside torn -out; food, clothing and utensils could be seen strewn over the floor under the semi-collapsed roof.

The leading coach of the two in the gully was gutted and broken in half, the second was wrecked but less extensively.

According to eye-witnesses, the engines after stopping briefly, went on to Kendal, where the alarm was given. The Mandeville police were informed and under Superintendent W. S. Ashley, in charge of No. 3 Area, and Deputy Superintendent O. F. Bernard, in charge of the Manchester Division, set about organising rescue work. Police were brought In from outstations with transport and from Spaldings, while a detachment of 15 under gzt. McLean was on the spot from' May Pen by 2 a.m. Nurse Donegan arrived early on from Mile Gully, reportedly alerted by her husband who works on the railway and Dr. Horace Henriques was brought by the police, being followed soon after by Dr. Olive Gordon of Mandeville and later by all the other doctors in the district. Nurses and dispensers were also called upon and responded willingly. Several first aid posts were set up on the scene and others at Kendal station.