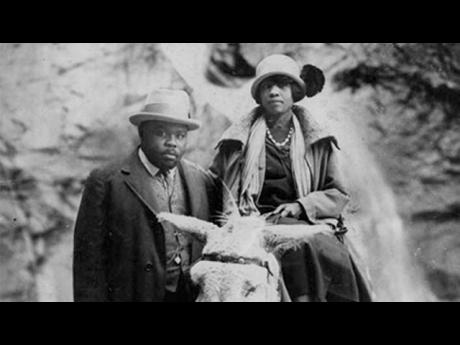 They say that behind every successful man, there is a woman, and that can be said about Amy Euphemia Jacques Garvey, the second wife of National Hero, Marcus Garvey.

Jacques Garvey was a pioneering female black Journalist, activist and publisher in the 20th century, championing the cause of Pan Africanism and the Garveryism movement, and going on to becoming an integral cog in the latter.

The Kingston-born Jacques Garvey was an astute scholar very early on, performing well at Wolmer’s Girls’ School, before moving to New York in 1917 where she began her journey as a writer and publisher.

Her first major effort came in the form of the Negro World newspaper, a publication out of Harlem, New York in 1918.

Her strong belief in the fight against racial injustices and inequality in society led her to Marcus Garvey. She became fascinated with his work with the United Negro Improvement Association (UNIA) in New York at the time.

After attending a conference, Jacques Garvey became enthralled by Garveryism, and it was a matter of time before she got heavily involved with the movement, and would eventually go on to being Garvey’s secretary at the UNIA.

Following Garvey’s divorce from Amy Ashwood, Jacques Garvey and the UNIA boss were said to have developed a close relationship outside of their profession. In 1922, Marcus Garvey married Jacques Garvey, who immediately set about documenting and establishing journals of husband’s speeches and work.

Some of her early work included the publishing of ‘Philosophy and Opinions of Marcus Garvey’. The work inadvertently made her the face of the UNIA and the role of women within the organisation.

Other publication would follow, including her book ‘Garvey and Garveyism’, which many felt inspired the man himself.

Upon Garvey’s conviction for mail fraud back in 1923, Jacques Garvey was forced to assume the leadership of the UNIA. In addition to speaking all over the country to raise money for Garvey's defence fund, she edited and published volume two of the ‘Philosophy and Opinions of Marcus Garvey’, as well as two volumes of his poetry, ‘The Tragedy of White Injustice’ and ‘Selections from the Poetic Meditations of Marcus Garvey’.

Following Marcus Garvey’s deportation in 1927, Jacques Garvey moved back to Jamaica and during that time she would produce two sons: Marcus Mosiah Garvey III, born 1930, and Julius Winston Garvey, born 1933.  She would remain with the children in Jamaica when Garvey moved to England in 1934.

After Garvey died in 1940, Jacques continued the struggle for black nationalism and African independence.