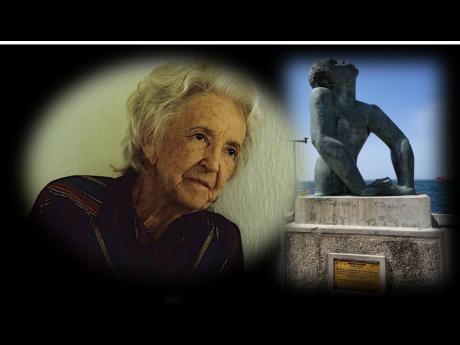 Edna Manley and a picture of the famous sculpture 'Negor Aroused'.

Edna Manley is, today, agreed to be one of the most important artists and art educators in Jamaica’s history. Her work and influence transformed the landscape locally, with creatives countrywide being able to thank her for a continuous churn of artists, who now see the field as a bonafide profession.

Born in Yorkshire, England to a Jamaican mother and an English father, Manley studied at various art schools in England, including St Michael’s School of Art, London, and privately with Maurice Harding, the animal sculptor.

Sculpting was what Manley would initially become known for, but her skill and craft led her to achieve great acclaim for her drawings and paintings as well.

After marrying People’s National Party (PNP) founder Norman Manley in 1921, Edna moved to Jamaica with her husband in 1922, and from then she was a keen supporter of art education on the island.

Inspired by her new environment in Jamaica, one of Manley’s first sculpting was ‘The Beadseller’. Shortly after, ‘The Beadseller’ was to have a male counterpart, ‘The Listener’, after which Edna went to England in 1923 with her two plasters. The visit proved fruitful. She had the plasters cast in bronze was accepted into the Society of Women’s Artists and had ‘Beadseller’ displayed in their 1924 Exhibition.

Manley produced several famed sculptures, displaying themes such as sexuality, feminism or culture. Some of those works including, ‘Negro Aroused’, are part of her permanent collection at the National Gallery.

In 1965, she created a statue of Paul Bogle to commemorate the heroism he showed during the 1865 Morant Bay Rebellion.

Vowing to pass her knowledge, she was instrumental in teaching classes at the Junior Centre at the Institute of Jamaica, which would then become Jamaica School of Art and Craft in 1950. In 1995, the institution was renamed the Edna Manley School of the Visual and Performing Arts.