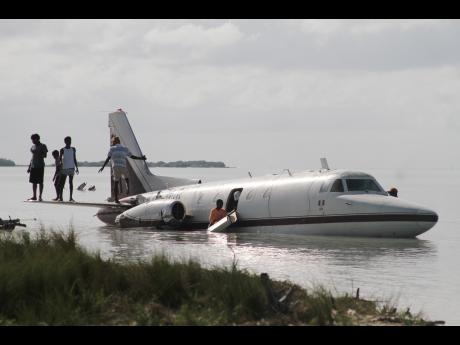 Nathaniel Stewart/Photographer Residents of Rocky Point scavenge for souvenirs from the crash-landed plane.

It seems a not completely unfamiliar case of Jamaican police work not being able to keep up with the organisation of international criminal minds, as Dr Horace Chang, minister of national security, has had to admit that the country was bested by smugglers of unknown origin.

Men on mystery plane have fled the country – Chang

Mexican cartel a source of worry


THE OCCUPANTS of a deregistered plane that crash-landed on a Rocky Point beach in January have reportedly fled the country, and the Government has given the clearest indication that the aircraft was on a smuggling mission.

The plane had intended to make a refuelling stop in the southeast Clarendon region but missed an airstrip, Dr Horace Chang, the minister of national security, has revealed.

Chang, who is also Jamaica’s deputy prime minister, did not disclose the original destination but said it was not the Vernam field airstrip 21 kilometres away from the white Sand Beach crash site.

“While they missed the airstrip, they would have had some connection down there that picked them up and whisked them out of the area,” Chang said at a recent Gleaner Editors’ forum.

“We are aware, intelligence-wise, that they have fled the country already.”

Chang’s disclosure dovetails with the narrative of Police Commissioner Major General Antony Anderson, who announced at a February 1 press conference that the ill-fated plane was not destined for Jamaica.

The 12-seater plane crash-landed on the Clarendon beach on the evening of January 23. It had been retrofitted to allow for more cargo space.

The ownership of the twin-engine aircraft is domiciled in Mexico.

Residents scavenged the plane for souvenirs and parts shortly after men had reportedly been seen disembarking the aircraft and fleeing.

South Clarendon is a hub for the smuggling of illegal contraband, including marijuana, cocaine, and guns.

But Chang appeared to be particularly worried about the drug-running network between Mexico and Jamaica.

“When the Mexican cartel starts tipping into Jamaica, we have to pay special attention to it,” he said.

The deputy prime minister said that the Holness administration was committed to making amendments to the Evidence Act to expedite the destruction of contraband, “because it’s difficult to operate with these huge samples they tend to insist under our courts”.

“We have intercepted tons of contraband ... The guns tend to be thrown overboard, so we don’t find them,” he told editors and reporters.

“The coke we sometimes find on the shores, [and] we have been seeing a few big seizures recently.”

Chang also downplayed the value of establishing a marine police post in Rocky Point, saying that move could cause more harm to the security forces than damage to the criminal network.

A marine post for the coastal community has been a bee in the bonnet of Winston Maragh, mayor of May Pen. He has been lobbying for that intervention since 2002.

But Chang pooh-poohed the worth of the investment spend and returns to be had from setting up an outpost in the vicinity of the seaside district.

“It would be a very small post, and you’re really subjecting your members of the force to the influence of a pretty heavily resourced network of criminality that operates out of Rocky Point,” Chang told The Gleaner.

“That kind of posting would not do much.”