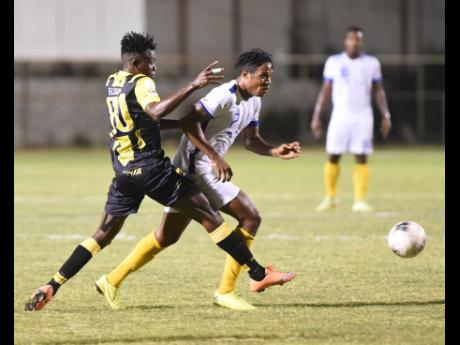 FILE Stephen Williams (right) from Waterhouse dribbles away from Elliader Dorius (left) from Don Bosco from Haiti during their Concacaf Club football match at the Anthony Spaulding Sports Complex on Sunday, February 2, 2020.

The spread of COVID-19 put paid to sports in Jamaica, but unlike something like track and field, where an athlete can train, a team sport like football has suffered even more. For a team like Waterhouse, this poses problems of a regional scale that answers must be found to.

We need time to prepare

WITH THE FLOW Caribbean Club Championship (FCCC) pending in May and with no football activity locally for almost a year, Waterhouse FC coach, Marcel Gayle, is concerned that his team will be short on preparation when the tournament comes around.

Gayle said that having no competition since last March puts them at a huge disadvantage and has added his voice to those in the fraternity calling for a swift return of the sport.

He warned further that his team’s fate would be no different than when they crashed out 3-1 to Arcahaie of Haiti in the Concacaf League Round of 16 last season under similar circumstances if they do not get a chance to compete soon.

“As soon as you look, it will be time to play (tournament). The FLOW Caribbean Cup starts the 14th and run on to the 26th, and the inactivity (locally) can lead us to crash out of the tournament like November last year,” said Gayle.

“So this continued inactivity is not showing Jamaica’s football in the brightest light,” he said.

Gayle argued that every coach relies on good preparation going into a game or competition and not having proper opportunities to prepare will cost them dearly.

“Without preparation going into an international game, you will not have enough time to assimilate what we can really accomplish. We will always try our best, but you cannot know that experience unless you are playing. If it continues on this particular course, getting the players up physically and then mentally will also be really tough,”Gayle argued.

“But if every effort was used to get the game back on the road, we would really appreciate it, and we don’t just want to play football for football sake. It is also these guys’ livelihood,” he added.

Teams were training up to late last year, but all training ceased after the Government order in January requiring teams to obtain approval for training.

Though Gayle understands the Government’s position given the latest spike in COVID-19 cases, he believes that protocols have been developed for the Premier League to be played in the current global health crisis.

“We don’t want to put people at risk because we are playing football, but we have the guidelines to adhere to so that some semblance of order can take place and we can get some normalcy with football being played. So, hopefully, we can get the yes (approval) so we can start as quickly as possible,” said Gayle.

The FCCC tournament takes place in the Dominica Republic from May 14-26. Waterhouse have been placed in Group B alongside Don Basco of Haiti and Delfines del Este FC of the host country, the Dominican Republic.

Group A consists of Portmore United, Cavaly AS (Haiti), and O&M FC (Dom Rep), and Gayle is disappointed that his team and players may not be able to show what they are truly capable of because of local football’s dormancy.

“It is heart-rending knowing the quality of your team, but because of (lack of ) preparation, there is no two ways about. It is going to be hard. Every day we are asked to be as professional as possible, but it has been a year there has been no football activity,” Gayle stated.

The top two teams from each group will contest the semi-finals. The winners of the last four will then advance to the May 23 final.

The champions will advance to the Concacaf Champions League. Second and third place will progress to the Concacaf League, Round of 16 and preliminary round, respectively.