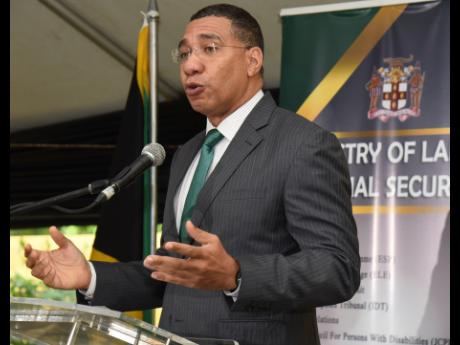 Prime Minister Andrew Holness has come out swinging at persons who have been throwing bombs themselves. Suggesting there is a difference between working hard and appearing to work hard. According to the Prime Minister, his absence from public utterances on COVID-19 has come about because of the nature of the hard work he has been doing behind the scenes. Whether the country believes him or not in the wake of climbing cases and a breaking healthcare system is yet to be seen.

PM hits back at critics accusing him of hiding

STUNG BY criticisms that he has been largely absent from the front line in leading Jamaica’s fight against the COVID-19 pandemic, Prime Minister Andrew Holness yesterday said that he has been working in the background while the country awaits a roll-out of vaccines.

“What the Government has been doing behind the scenes is to refine a new set of measures that will enable the economy to continue but to have the control on movement that will prevent the spread of the disease,” Holness stated as he pushed back against critics who have unfavourably compared his approach to that of Mia Mottley, the Barbados prime minister.

WORK BEHIND THE SCENES

Turning to criticisms from the Opposition that Jamaica has been slow out of the blocks to procure COVID-19 vaccines, Holness insisted the Government has been working closely with stakeholders to get approved vaccines to Jamaica.

Yesterday, the Indian High Commission revealed that its donation of 50,000 vials of vaccine could arrive in the island as early as next week.

“The work that goes on behind the scenes to get it to this point, we don’t bring it to the public,” Holness said.

“Because we don’t, it leaves a gap for speculation. You would have heard things like ‘the rest of the Caribbean is ahead of us’ and they have done things that we haven’t,” Holness said as he thanked the Indian Government for its generosity.

Holness also took issue with bigger countries gobbling up vaccine supplies, leaving smaller states, such as those in the Caribbean, vulnerable.

“There is a situation now where larger countries, more affluent countries are able to secure supplies. We are in the early phase of production of the vaccines and, therefore, the demand for the vaccines for outstrips the existing supply. And it is those persons who have the existing capacity and who have the sovereign control would obviously get the first control over supply,” Holness said.

“For countries like Jamaica, there should be greater consideration,” the prime minister asserted.