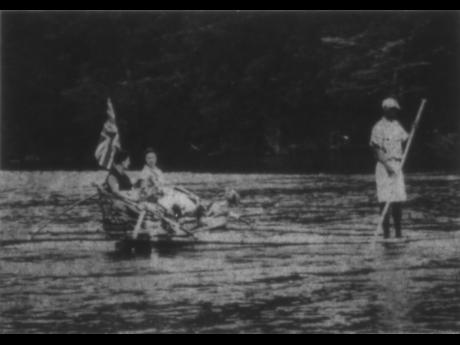 It was easy along this section of the Rio Grande in Portland on February 23, 1955, but later on Princess Margaret’s bamboo raft was to meet the frothing ‘rapid’ of the river. She is caught by camera conversing with Lady Foot, while veteran raftsman Simeon “Red” Grant pilots the light craft along the scenic river route.

The tourist destinations in Jamaica are notorious for attracting the very rich and the very famous. One of those destinations, the Rio Grande, grabbed the attention of British royal, Princess Margaret. The Gleaner was there to document the memorable occasion.

Rafting down the Rio Grande, Jamaica’s world-famous water sport that has thrilled thousands of visitors to the island, came into its Royal own yesterday when for the first time in its exotic history, a Princess rode the “rapids”.

Princess Margaret, on the last afternoon of her visit to the island, went on one of the picturesque bamboo rafts for the traditional 7 1/2 –mile river ride from Berrydale to Burlington in the lush heart of the Rio Grande Valley in Portland. She rode on a special raft, decorated for the purpose; and enjoyed every minute of the unusual experience.

Typical Portland weather marked the trip. It started out fair sunlight shining from out of a dun-coloured sky, but by the time the trip was halfway, the sun was out, bright and sparkling, making the dark-green river gleam. Down at Burlington a short drizzle gave fears of a wet welcome for the Princess; but she landed in dry, though somewhat threatening weather.

After lunch and a rest at “Soncombe”, the beach house just outside Port Antonio which was placed at her disposal for the day, Princess Margaret went to the starting-point of the ride at Berrydale,  tiny district on the bank of the wide, olive-green river which flows through the most picturesque portion of this picture-postcard parish.

A small crowd of citizens in the area, mostly fisherfolk, the rivermen’s families and small cultivators gathered at the point to see the Princess. They looked on respectfully has she arrived – a petite, carefree figure in holiday clothes, to start her romantic adventure that was in such dramatic contrast to the rest of her formal programme.

Piloted by veteran raftsman Simeon “Red” Grant who looks back on 45 years of piloting those 34-foot raft down the Rio Grande, the Princess’s raft was specially prepared with bright-coloured cushions, a floor mat, flowers and the flying Union Jack.

Piloted by veteran raftsman Simeon “Red” Grant – who looks back on 45 years of piloting these 34-foot rafts down the Rio Grande – The Princess's’s  raft was specially prepared with bright coloured cushions, a floor mat flowers, and flying the Union Jack.

Seven other rafts bearing the rest of the Royal party including His Excellency the Governor made up the “fleet”. They made an attractive picture as they moved down the water – eight rustic yellow craft, long and smooth stroke of the raftsmen and gay with the colourful grab of their occupants.

Princess Margaret rode in the fourth raft behind the Police “pilot boat”, and her aides on two others. Beside her on the two-passenger seat was Lady Foot, wife of the Governor, who enjoyed the role of pointing out the sights on the river to Her Royal Highness and answering her many interested questions, as they rode past the green curtain of the river bank, feathery with bamboo, lush with cane and coconut palms, and majestic with the dark, heavy foliage of greater trees.

And so the Princess enjoyed one more unusual and certainly delightful experience of her visit. Thrilling to the gay informality of it, she showed evident pleasure at the end of the two and a quarter hours it look to make this romantic journey. There was no excitement or untoward incident ; just the joy of doing something different and out of the ordinary and seeing at close hand the technicolour beauty of Portland’s river and valley scenery.

Landing at Burlington, the headquarters of the Portland Fishing Club, Her Royal Highness smiled her delight as she stepped ashore. She shook hands with and thanked her “driver”, and told him she had enjoyed the trip. Then she left for San San, passing quickly through Port Antonio, to rest after her outing and to prepare for the private beach party at night.

After her visit to Morant Bay, the Princess went over to San San, at just before 1 p.m., accompanied by the Governor and Lady Foot, and other members of the Royal party. There to meet her were Capt. And Mrs. DePass and Mr. and Mrs. R. K. Nunes, owners of “Sancombe”, who were presented to Her Royal Highness lunched privately with her hosts and members of her party.

Princess Margaret left for Berrydale at 3:00 pm and embarked for her ride at 3:30 p.m. She landed at 4:45 p.m. at Burlington and returned to San San at 6. She was met at Berrydale by the Hon. F. V. Grossett, Custos of Portland, who also was at Burlington and saw her to her car.

Last night the Princess spent another enjoyable informal occasion at the private beach at Frenchman's’ Cove. In the seclusion of this seafront setting against a romantic background of natural beauty and haunting “native” music, Her Royal Highness spent her final evening in Jamaica. The function was closed to the press.