Women and the Jamaican Political Process – Part VI: “All That Glitters …” 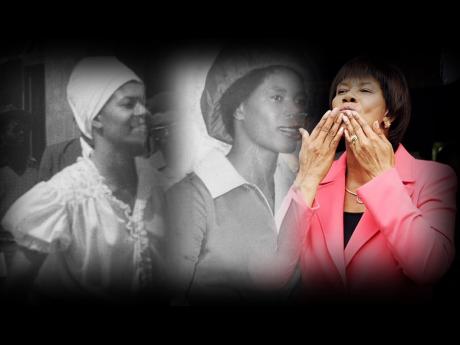 Edward Seaga’s overwhelming victory in the 1980 General Elections generated islandwide celebrations as women of all classes dominated the crowds who took over the streets.

For some, Jamaica had been saved from the threat of communism; all hoped that with the elections over, there would be an end to the violence. Most important, was the expectation of a dramatic improvement in the economy. The JLP’s victory was hailed in Washington as a triumph for free-market capitalism, and Seaga was the first foreign head of state to be invited by newly elected US President Ronald Reagan to Washington.

Seaga began his term of office with unprecedented levels of economic support from the United States with US$1 billion in special assistance and a special US$67-million purchase of Jamaican Bauxite for the US Strategic stockpile. There was also US$133 million coming from the World Bank, while the IMF pledged assistance to the tune of US$698 million. Supermarket shelves were soon overflowing with both luxuries and necessities and Seaga and the Jamaica Labour Party (JLP) certainly glittered.

However, as the electorate that voted so enthusiastically for the JLP would soon discover, “all that glitters is not gold”. Within two years the ‘glitter’ would fade as the anticipated levels of economic growth failed to materialise. The Stone Polls of October 1982 found that “two years after its election to office, the JLP led by Prime Minister Edward Seaga had been overtaken by the Michael Manley-led People’s National Party (PNP) in popular support”.

Seaga’s honeymoon with US President Ronald Reagan quickly cooled after it became clear that Seaga was a committed state-capitalist and not a “free marketer”. As such, he received the same treatment as was accorded to Michael Manley by global capital and its institutions – the IMF and the World Bank. As Jamaica’s goods and services became more uncompetitive in the global free market, there were business cutbacks and layoffs.

While the supermarkets were overstocked, the purchasing power of the masses remained low with a 30% unemployment rate. The failure of IMF tests brought the devaluation of the Jamaican dollar, and the declining foreign exchange earnings increased Jamaica’s foreign debt.

Predictably, it was the women who bore the brunt of the economic recession and life for them would get increasingly difficult under Seaga’s JLP. The rising cost of food, reflected in the increase in consumer prices by 29% in 1984 and 23% in 1985, made life even more challenging for female-led households and the women who dominated the ranks of the unemployed. Layoffs at the Kingston Public Hospital created a health crisis as three wards were closed which significantly reduced health service delivery.

The following letter to Beverly Manley was indicative of the pressures which single mothers and female heads of households experienced:

I am a twenty four years old woman having four children, oldest one is seven years old and the youngest is 1 month, It like a bad luck...when I got the first one the baby father went away and leave me. I talk to a next one to see if I could get feeding and clothing for the child. It so happen I got the second one until it reaches four. Dear Mrs Manley, I am do asking you if you could send something in my behalf to help me or I am asking you to put me on the pension roll.”

On International Women’s Day, March 8, 1983, the Committee of Women for Progress launched the Women’s Resource and Outreach Centre to help women cope with the hard times.

Then came the general strike of 1985 which lasted for one week and brought out as many women as men to demand an end to the layoffs and the rising cost of living. In the 1986 Local Government Elections, women turned out in numbers to wipe out the JLP at the polls as the PNP won the majority of seats in 12 of the 14 parishes.

The GDP growth recorded in 1981 was calculated on the low base of 1980 when violence reduced the economy to an all-time low. By 1982 it was clear that the expected economic recovery was not on the cards. Things continued to get worse, as up until 1987, seven years into the Seaga Administration, economic output had not yet recovered to what it was in 1978. According to Jamaica’s eminent social scientist, Carl Stone,

He went on to observe that, “the massive external assistance to the Jamaican economy under Seaga’s leadership production levels in 1987 were still below real output in the years between 1970 and 1976 …  The average national output in the JLP years 1980 – 1987 was actually less than the average output in the second PNP term 1977 – 1980.”

One economic opportunity for women during this period was the provision of foreign exchange for the creation of a state-supported body of higglers designated as Informal Commercial Importers (ICIs), who travelled mainly to Panama to source commodities which they sold at competitive prices on the Jamaican market.

Another opportunity for the employment of women was in the free zones which were created for foreign investors, who were given generous incentives, but subjected the predominantly female workers to low pay, high work quotas and oppressive work conditions.

The economy began to show signs of recovery after 1987, but by then a major concern for Seaga was the fallout between himself and the Reagan Administration. The following assessment of Seaga’s tenure by Timothy Ashby, a senior operative in the US State Department and Department of Commerce indicated the level of the fallout.

“Despite 1 billion in U.S. development assistance and the close friendship of the Reagan administration, Edward Seaga failed to transform Jamaica’s economy during more than eight years in office, becoming a disappointment, as well as a political embarrassment, to his many supporters. His stated commitment to the private sector seemed at odds with an evident distaste for dismantling Jamaica's pervasive statism … Per capita GDP was unchanged from 1978 while foreign debt had more than doubled, leaving Jamaica one of the world’s most indebted countries on a per capita basis. The Jamaican dollar had plummeted in value by 300 percent against the U.S. dollar yet was still considered overvalued by World Bank and other economists.  Nearly a quarter of the Jamaican workforce remained unemployed.”

By the 1989 General Elections, women, who had made major social and economic advances under democratic socialism, had lost hope of any further progress under Seaga’s JLP. They were in the forefront of the electorate which seized the opportunity, with both hands, to return Michael Manley and the PNP to power.

Once again Portia Simpson led the PNP women. She was supported by Shirley-Ann Eaton (St Andrew North Central), Violet Nielson (East Central St James), Phyllis Mitchell (North Eastern St Catherine) and 20-year-old Donna Scott-Bhoorasingh, whose spirited challenge against Mike Henry in Central Clarendon, in the face of mounting partisan violence, was one of the highlights of the election campaign.

The PNP led by Michael Manley won 45 of the 60 seats in those elections, and the overwhelming support of women was a fitting tribute to a prime minister who had placed the concerns of women in the consciousness of the national community.

Portia Simpson marked a new stage in her political career as the only female member in the PNP’s 1980 Cabinet. Joan Webley was the only female senator named by the JLP. The new PNP senators named were Lucille Mair, Heather Robinson, Syringa Marshall-Burnett, Donna Scott-Bhoorasingh, and Marjorie Taylor.

Collectively, they represented the best of the professional stratum, the idealism of youth and the interest of the working-class.

They all joined Maxine Henry to bring a wealth of talent and experience to the Upper House.