Charles fires back after Ombudsman’s smack 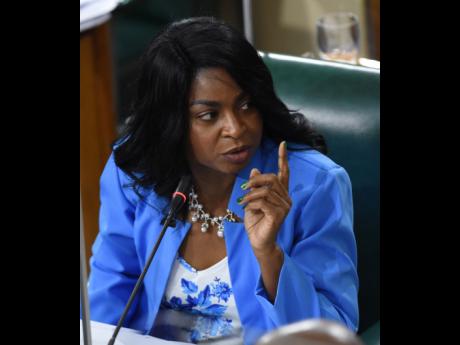 Michelle Charles, far from shying away from the scathing remarks from political Ombudsman Donna Parchment Brown, has come out firing from the hip, denying any wrongdoing and suggesting were the political sheriff not careful, she could find herself in a courtroom.

STUNG BY a reprimand about her judgement after a six-month vote-buying probe, legislator Dr Michelle Charles has rejected recommendations that she apologise for the perceived blunder.

Charles, the St Thomas Eastern member of parliament, was scolded by Political Ombudsman Donna Parchment Brown for the distribution of state funds through her family business in the lead-up to the September 3, 2020, general election.

Parchment Brown, in a letter dated March 3, 2021, and addressed to Prime Minister Andrew Holness, delivered a scathing rebuke of Charles, whose distribution of state largesse at a St Thomas farm owned by her father could have been reasonably construed “to influence voters”.

Pearnel Charles Sr, her father, was then the outgoing MP for Clarendon North Central.

“Dr Charles’ words and action of turning around and pointing out the message on her shirt in a context where government funds were being distributed to persons during an election campaign was a breach of tenet 1(f )(i) of the Agreement and Declaration on Political Conduct,” the ombudsman wrote.

That tenet says political candidates “must not” use funds derived from any source, public or private, to improperly sway electoral choices.

Charles told The Gleaner on Thursday that she, Prime Minister Andrew Holness, and Jamaica Labour Party Chairman Robert Montague had not received the ombudsman’s correspondence, which she described as discourteous.

“Nobody on our side has received it, and I wonder why?” Charles said as she questioned the motive of t he political ombudsman.

“She has my two office addresses in St Thomas, I never miss Parliament, and she has my number. She can find me anywhere,” a furious Charles added.

But that is not the first-time MP’S main contention.

Charles argued that the conclusions of t he political ombudsman are “not logical”.

The MP said that the political ombudsman has tried to embarrass her and vows to push back against those attempts.

Charles insisted that she had never tried to buy votes, declaring that the ombudsman’s accusations were crafted to avoid legal consequence.

“She made sure she writes it properly so I cannot sue her for defamation of character because she did not say I bought votes because she knows that I didn’t,” Charles told The Gleaner.

“Even a four-year-old can see that there was no vote-buying,” Charles, a dental surgeon, charged.

The dental surgeon was the first in a line of Charleses to break the near 30-year hold of opposition parliamentarian Fenton Ferguson.

Parchment Brown has noted that improperly influencing electoral choices is not a criminal offence under the Public Ombudsman (Interim) Act, unlike in Section 91 of the Representation of the People Act.

Parchment Brown said she was not authorised to make a report to the director of public prosecutions (DPP).

However, DPP Paula Llewellyn told The Gleaner on Thursday that the political ombudsman could turn over the case to the police if there was cause to believe that the law had been broken.

“What the police would do is investigate and then, perhaps, ask us for a ruling based on the findings of their investigations,” Llewellyn, the country’s top prosecutor, explained.

Parchment Brown also recommended that Charles, for three months, seek counsel from a senior party member on the Code of Conduct and the Political Ombudsman (Interim) Act.

But Charles brushed aside that suggestion as well.

“I have the best mentor in the world, and I have his DNA,” she said, hinting at her father, a retired Speaker of the House of Representatives. “He is a man of integrity, so she doesn’t have to recommend that to me.”