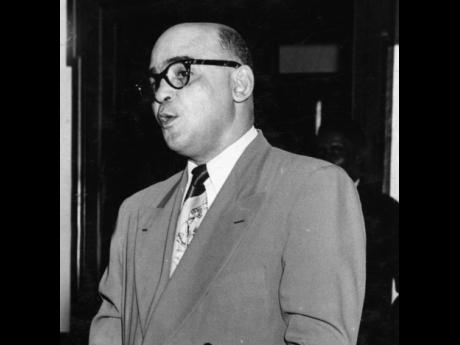 Minister of Trade and Industry, the Hon. Wills O. Issacs

The entrance of Johnson & Johnson into the market as a local producer marked an economic direction that all indicators suggested put the island nation on target for first-world status sooner rather than later. Though that has not happened, 60 years later, the unveiling of that potential is still important.

“You have a duty, as citizens to buy first and foremost what is made in your country. If you do not carry this responsibility of citizenship, then you will just have a Government that will prevent you from living above your means.”

The new and modern cream and blue two storey building is air-conditioned and has been constructed at a cost of about of £175,000.

Mr. Isaacs in declaring the building open, said there was not sufficient pride in the people of Jamaica in the things that were produced here and he thought that it was necessary to start upon a programme of trying to teach the workers that they should take pride in the things that they produced, knowing that when they are marked “made in Jamaica,” they would always bear a good reputation throughout the world.

The Minister congratulated the firm for having located their West Indies factory in  Jamaica and said he wished to assure the proprietors that in investing in Jamaica, they were investing in a country where their money was safe. Said the Minister “It does not matter which party gets in power, investment in this country is always very safe.”

Mr. Harold Braham, General Manager of the Jamaica Industrial Development Corporation said the opening of the new factory, made himself and the JIDC very satisfied that another job has been well done.  He said he hoped in a very short time he would see an expansion of the industry in Jamaica with more and more of Johnson’s products being manufactured here.

Mr. J.A. Blackwood, Managing Director of the new factory, who was chairman of the function, outlined some of the company’s responsibilities which he said were to the public, their employees, the community and their shareholders.  He said that it was the company’s desire to go forward with Jamaica’s progress towards financial and economic stability in the years ahead.

As far as their employees were concerned, Mr. Blackwood said the company was vitally interested in training and they have formed a definite policy of promotion from within, which involves making opportunities for all the people with whom they are associated.