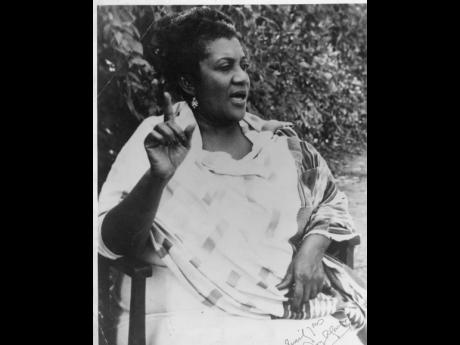 Among those many hats, Amy Ashwood-Garvey was also co-founder of the Universal Negro Improvement Association (UNIA) and the first wife of Jamaican national hero, Marcus Mosiah Garvey.

Ashwood-Garvey is acknowledged as building upon the feminist activist work of African and Caribbean feminists before her.

Her work resulted in significant contributions to the Pan Africanist movement, feminism and community development in Britain, the Caribbean and West Africa.

Born in Port Antonio, Jamaica in 1897, she spent her early years and got her early schooling in Panama but was sent back to Jamaica where she attended Westwood High School.

In a semi-autobiographical article, Ashwood-Garvey highlighted Westwood as the place where, at age 12, she became “racially conscious”.

She heard the principal's wife commenting that it was a pity a collection that had been taken to aid a committee was not going to "her people", meaning Africans.

This led Amy to find out more about “her people”. She found out about the transportation of Africans to the Caribbean to be slaves.

Her curiosity pointed her in the direction of her own grandmother, a former slave who still had memories of her original hometown in Ghana, Africa.

After she completed school, Amy was very active in activities surrounding culture and social welfare.

She used to organise debates at East Queen Street Baptist Church, and it was at one of these debates that she met Marcus Garvey.

They were both passionate about African-American activism and were involved in political activities that influenced their thoughts, ideas and strategies for liberating Jamaica.

In 1914, the two founded the UNIA in Kingston, Jamaica, which was intended at first as a self-help and education movement with targeted local goals but soon took on much wider, and eventually global, political and cultural significance.

She married Marcus Garvey on Christmas Day, 1919. They separated the following year, and her work with the UNIA came to an end.

Much of Ashwood-Garvey’s activism outside of the UNIA, took place in England.

There, she was heavily involved in pan-Africanist activities as well as feminist activities through her friendship with Sylvia Pankhurst, Ethiopians and feminist.

Early on, she collaborated with Nigerian law student Ladipo Solanke to form the Nigerian Progress Union (NPU), which to start, consisted of 13 students.

At the very first meeting, she was honoured with the Yoruba chieftaincy title "Iyalode" (meaning "Mother of the Community").

She later supported Solanke's West African Students' Union, but in 1924 she went to New York, where she produced comedies with her companion, Sam Manning, a Trinidadian calypso singer who was one of the world's pioneering black recording artistes.

Amy passed in 1969 but her legacy is carried on, particularly in the arena of African independence and cultural appreciation, and as a pioneer in ongoing efforts to improve the status of black women globally.