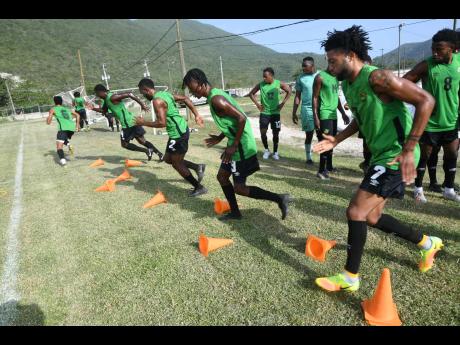 The Jamaica Football Federation received some good news this week despite contentious negotiations with the players, as the Ministry of Sport has approved a training camp for the Reggae Boyz. The organisation now feels this is an indication that local football might be back on the agenda.

CHAIRMAN OF the Jamaica Football Federation (JFF) technical committee, Rudolph Speid, said the Government’s approval of a training camp for the Reggae Boyz is a clear indication that local football is on a return path.

Minister of Sport, Olivia ‘Babsy’ Grange, says approval was given to the JFF for the staging of training camp at the University of the West Indies (UWI)/JFF/Captain Horace Burrell Centre of Excellence at The UWI, Mona campus.

This is in preparation for the Reggae Boyz’s friendly international against the United States on March 25.

Last month, the Ministry of Sport ordered the immediate shutdown of a training camp that was being staged by the JFF at the same venue, noting that the requisite permission was not granted.

“This is the first step to returning to normalcy in the country and we are very delighted about this,” said Speid. “I think what is also important is that football is now returning to the shores of Jamaica.”

“I am hoping that in the future we will have more camps approved so that we can look after the Under-13, Under-15, Under-17 and Under-20 and those teams that have to play international competitions,” Speid added.

He said that the camp is very important for the Boyz because the coaching staff will now have a chance to look at the players who have not played any competitive football in over a year.

“We could not do without this camp because we haven’t played any football for a year now and if we didn’t get this camp, we would be the lamb to slaughter against the United States in this friendly match,” Speid added. “This camp is most important because we can now get the players in some shape so that we can compete against this US team.”

Former national assistant coach Bradley Stewart agrees that the training camp is a positive step for the Reggae Boyz ahead of the US encounter.

“I would think that it is a positive because it gives the coach a chance to link with the players, especially for the local-based players,” said Stewart.

“I think that if he has a rotation policy then obviously, he may think that he needs a big squad to be able to go through the games with a level of freshness and so camps are very important for us,” he said.