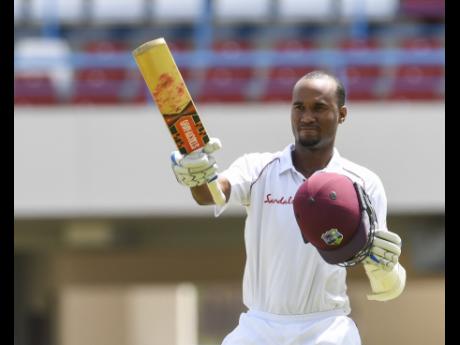 Kraigg Brathwaite is now the captain of the West Indies, but there are questions about whether or not, the change from long-time skipper Jason Holder will cause any friction in a team that is coming off a rare series win.

NEWLY-APPOINTED TEST captain Kraigg Brathwaite has praised the development of the side under Jason Holder and says he anticipates a productive working relationship with the man he has replaced.

The 28-year-old Brathwaite was announced Thursday to lead West Indies in the two-Test series against Sri Lanka starting next weekend, ending Holder’s six-year tenure in charge.

“We had a chat [Thursday]. I have known Jason from age 10 so we go way back, and I don’t think anything is going to change,” Brathwaite said. “He has my full support and I have his full support so we’re going to work as a team.

“I thought Jason did a fantastic job in the last [six] years leading the team and for me it’s a privilege to take over from him.”

Brathwaite, a longstanding deputy to Holder, has already led West Indies in seven Tests but it was the last two in Bangladesh last month, which swayed selectors.

Presiding over a weakened side after Holder and a plethora of first choice players skipped the tour, Brathwaite spearheaded the side to a whitewash of the hosts, to earn widespread acclaim for his inspirational leadership.

Brathwaite, a Barbados captain who also led West Indies at the 2012 ICC Under-19 World Cup, acknowledged the road ahead would be a difficult one but urged the Test side to keep alive the spirit shown on the Bangladesh tour.

“I want to thank God for giving me this opportunity. I look forward to the opportunity. I always saw myself as a leader, obviously as an opening batsman,” said Brathwaite, who has played 66 Tests.

“I look forward to the challenge. Obviously it won’t be easy but I thought the attitude we had in Bangladesh was key – the discipline we showed even at the practice sessions. Once we take that forward, the future is very bright for this team.”

Brathwaite’s elevation to the captaincy comes just months after he was stripped of the vice-captaincy last year due to a run of poor form, with all-rounder Roston Chase appointed understudy to Holder for the New Zealand tour.

Chase was among those opting out of the Bangladesh series and following a wretched outing in New Zealand which saw him manage 17 runs from four innings, has been excluded altogether from the 13-man squad to face Sri Lanka.

Brathwaite, who carries a Test average of 32 and scored the last of his eight hundreds nearly three years ago, said he did not anticipate the mantle of captaincy adversely affecting his batting.

“I’m in a good place. On the Bangladesh tour I got a start. Unfortunately I didn’t get a hundred in [the first Test] but I’m very happy,” he noted.

“For me it’s just to go out there and build the foundation for the team. When I go out there to bat, I’m a batsman and I’m not necessarily thinking about captaining. I’m pretty happy right and I look forward to leading this batting.”