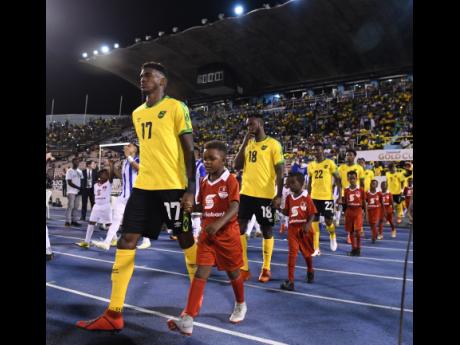 File
Damion Lowe (left) leads the Reggae Boyz to the field at the National Stadium in Kingston to take on Honduras in a Concacaf Gold Cup group stage match on Monday, June 17, 2019.

The Jamaica Football Federation’s issues with players and a general sense of disorganisation is hampering the preparation of the Reggae Boyz for the Gold Cup and could be the difference between disaster and failure.

‘TOO MANY OBSTACLES FOR TAPPA’

Former national assistant Bradley Stewart says that the latest obstacles ahead of the international friendly between Jamaica and the United States of America next week put head coach Theodore ‘Tappa’ Whitmore at a disadvantage in meaningful preparations for the Concacaf Gold Cup tournament and FIFA World Cup qualifiers.

The local training camp for national players, which was given approval last weekend, was ended abruptly by the Jamaica Football Federation (JFF) on Tuesday as the travelling contingent hurriedly left the island that day for Washington, DC, to attend their Schengen visa appointments for passage to Austria, where the game is to take place. However, despite six players receiving their US visas, eight missed the appointment on Wednesday and will miss the friendly on Thursday. Fifteen players were originally called up for the camp, with one having to leave because of a positive COVID-19 test.

Additionally, the long-term contract situation with the players ahead of the Gold Cup and the World Cup qualifiers is still unresolved. Stewart says that it presents the coaching staff with additional interferences with their preparations for the game.

“I find it very disappointing,” he said. “They (the JFF) would know from a long time that they have the date and visas are not easy to come by, so you have to plan ahead. It seems to me that it did not happen. I’m not so happy with the fact that the coach’s selection (first choice) are unavailable because of a visa issue.

“The fact that they have not come to a conclusion as to what’s to be paid to the players puts a damper on those players that opted to play this game. So what it does, [it creates] a less than adequate situation for the coach.”

Whitmore has repeatedly spoken of his desire for all outstanding issues to be resolved early so that the focus can be towards the Reggae Boyz’s two major competitions this year. A training camp, which had started earlier in the year, was shut down by the Ministry of Sports as it had not received authorisation. With the absence of several senior members as they continue to resolve the contract situation, and the limited opportunities for training ahead of the fixture, Stewart says that the game would not give a full picture where Jamaica stands ahead of both the Gold Cup and the qualifiers.

“It’s going to be a hit and miss, and I can’t be convinced that at the end of it, even with the [inclusion] of the English-based players, that it will be enough of an exercise for the coach to feel comfortable that he knows what the players are capable of,” Stewart said.

Six of the eight debutants in the 19-man squad are English-based players, including Reading’s Liam Moore and Watford’s Andre Gray. Despite the obstacles in their preparation for the game, Humble Lion head coach Andrew Price says that Whitmore now has the opportunity to assess more talent and get a dedicated pool of players to cope with the tight World Cup qualifying schedule, which begins in September.

“We have to look at everything as a silver lining,” Price said. “It will be an opportunity to assess those players and to see how well they can add to the core group because I have always said, for a World Cup qualifying schedule, we need at least a minimum of 40 players in the core group, especially with the understanding that a lot of games will be played in quick succession.”

The schedule will require Jamaica to play up to three games per international window for the qualifiers.