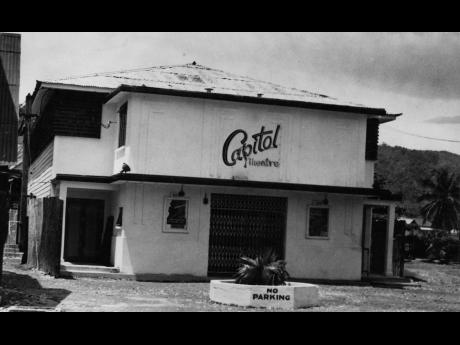 Portland was once the tourist capital of Jamaica. The place to go if you wanted to enjoy the best of the country. All the way back in 1939, for instance, its capital, Port Antonio, housed a modern cinema, the envy of all parishes save for Kingston and St Andrew which boasted and still boasts Carib Theatre.

The newly erected cinema house, the Capitol Theatre, threw its doors open for the opening shows on Saturday night March 25th. The theatre, which has been constructed with every modern amenity, having a Simplex Motion Picture Projector, and the R.C.A. high fidelity sound equipment, Arc Lamps which give result in very clear pictures, and other high class innovations, was the cynosure of hundreds of eyes Saturday night.

The picture selected for the opening, "The Life of Emile Zola" was a very interesting one, and it was the consensus of opinion that a better selection could not have been made. From start to finish the patrons who attended could be heard in low tones, giving remarks of satisfaction for the grand picturization of Zola's life, and for the excellent sound effect heard.

The new feature at the Capitol of having the ventilation louvres at floor level and at the ceiling,  keeps the theatre cool all during the shows, and this is another innovation which appeals to the comfort of the fans.

From early evening the flood lights at the front of the building were turned on and their variegated colour effect brought out general remarks of admiration. On all sides could be heard, "The Miniature Carib".

One would have expected a big rush at the opening night, so much having been done to afford the pub lie of Port Antonio an up-to-the minute picture house, but whilst there was a good attendance, there were many who could have been there, but were not present.

Many of the Patrons were questioned at the end of the show on Saturday night as to their opinion of the reproduction, and everyone had a pleasing word for the Management in putting through such a fine structure with all the modern fixtures that will make cinema shows a pleasure.

One lady when asked said she found the sound very good, and the picture was so clear there was no strain on the eyes. Another patron voiced his opinion that no better sound effect could be desired. There was still another who started first by remarking on the improved seats which will encourage patrons to the Capitol Theatre. Thus all things put together, the new building has passed a very creditable test by the picture fans. It is only left to the people then shelves to keep the shows going by their stalwart support.

Heartiest congratulations to the Management and the contractor and may the best of luck attend the new Capitol Theatre.