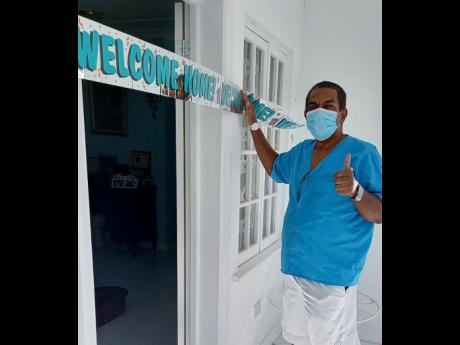 Richard Peters arrives to a welcome home banner after 12 days in hospital with COVID-19.

The image of a six-year-old praying that her father isn’t taken by COVID-19 early last week warmed the heart, but there was that sinking feeling that maybe disaster was around the corner. Later, The Gleaner captured the recovery of 65-year-old Richard Peters and his subsequent re-union with Rebbekah. His tale warmed the heart in what are pretty frigid times.

‘I was in the belly of the beast’

Dad who battled COVID in ICU reunites with family

Richard Peters’ six-year-old daughter, Rebbekah, asked him if he was going to die the day he was admitted to hospital. He promised her he would return home alive.

“Keeping that promise was most important to me,” said the 65-year-old father of two, who was discharged from the Cornwall Regional Hospital last Saturday afternoon after a battle with COVID-19.

Peters had spent 12 days on the COVID ward and a short stint at the intensive care unit (ICU).

Love for family and his faith in God, he said, kept him alive. That anchor held him so steady that even when he watched doctors fight in vain to save the life of a COVID-19 patient two beds from his, he wept intensely for the dead man’s family but never once lost hope.

“It was depressing. I was thinking, this was a husband, a grandfather, a father, an uncle, you name it,” said the chartered accountant, who has praised the Cornwall medical team for their compassion.

On Sunday afternoon after Peters worshipped with his church family online, he spoke of witnessing a doctor lying down beside a patient and squeezing a respirator to keep him alive.

A nurse later subbed for the doctor and kept on pumping.

“I have never seen anything like what I saw at Cornwall Regional Hospital. There were no super divas; they were respectful,” Peters told The Gleaner.

“... Even under stress, they were willing to communicate. I was in the belly of the beast,” he recalled.

The Trinidadian-born Peters, who is married to Jamaican Nina Peters, described the hospital staff as first class.

His story attracted the attention of The Gleaner after his children, Ravi and Rebbekah, created an ‘I Love You Daddy’ card made from cartridge paper and stood behind the fence of the ICU waiting for him to raise his head so he could receive their message.

“Their presence at the window was huge. My spirit was lifted seeing them. Tears came to my eyes. I looked forward to them coming the next day, and I called the nurses to wave to them,” he said.

Peters’ wife and children also caught the disease. They have since recovered.

Initially, Rebekkah, six, had isolated with her mom Nina while Mr Peters stayed with eight-year-old Ravi.

“I got it last. I lost my taste buds and was in a lot of pain, so I, too, went to the private hospital, where I was tested and referred to CRH,” Peters said.

On Saturday, Peters returned to a welcome-home sign and his masked children carrying sanitiser for his hands.

He will continue to isolate at home till Thursday.

“Returning home to my family is rapturous. I couldn’t sleep on Saturday night because I am still tired, still lethargic, but I am comfortable,” said Peters.