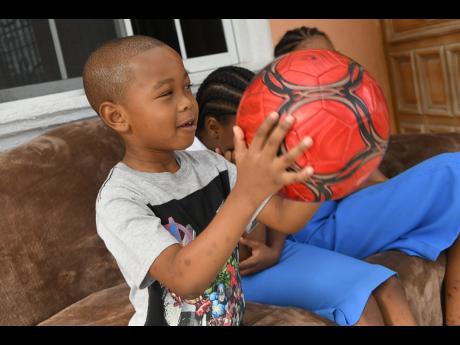 The rise in COVID-19 numbers and more importantly, the increase in those hospitalised on account of the virus have had devastating impact on those suffering from other illnesses. The story of six-year-old Nathan Wanliss is one such case.

SIX-YEAR-OLD NATHAN Wanliss is unable to attend online classes, watch TV, or use his tablet as he suffers from cataract in the right eye and deteriorating vision in the other.

He cannot see well enough to practise penmanship or read without putting excess pressure on the left eye.

Nathan is one of countless Jamaicans whose elective surgeries have been derailed as hospitals sideline non-emergency cases amid mounting admissions from COVID-19. More than 474 COVID-19 patients were in hospital on Monday.

In December 2020, his mother, Cecelia Henningham-Wanliss, recognised that he appeared crosseyed and initially overlooked it.

She became concerned when it reappeared several times.

After seeing their family doctor on January 2, 2021, young Wanliss was referred to an ophthalmologist at Bustamante Hospital for Children.

He was sent to do testing privately, and his mother went in with the expectation that the diagnosis could be corrected with minor therapy.

But when the optometrist began the vision test, Nathan could not identify any letters with his right eye and could only pick out the first three lines with his left.

With his mother sitting in the direction of the chart, Nathan was again asked to call the letters using his right eye.

“The optometrist said, ‘You’re looking where your mommy is,’and he said, ‘I can’t see my mommy, so I don’t know where she is.’”

That’s when she knew the severity of the crisis.

Nathan was diagnosed with cataract in the right eye, a disease that predominantly affects adults and causes the lens of the eye to become cloudy or opaque.

Following the diagnosis, she was told to return to Bustamante Hospital because her son needed urgent surgery.

The two attended the next eye clinic at the hospital and were told that the April 23 follow-up date they had got prior would remain.

The doctors explained that only emergency surgeries were being done because of the impact of COVID-19 on hospitals.

Desirous of treating the matter urgently, she visited the optometrist again to request another referral to take her son to the University Hospital of the West Indies (UHWI).

She got an appointment to see a paediatric ophthalmologist at UHWI on February 18.

“They explained to me that the longer it takes to do the surgery, the more damage he would have in his eyes,” the mother said.

Yet, their response about the surgery mirrored what she was told at Bustamante, with an appointment scheduled for March 23, to see a consultant.

After that visit, her son was put on the urgent list but still no timeline on when the surgery could be done.

Her son’s eyes have become lazy, and he will require glasses and significant therapy after surgery.

The next return date at UHWI is eight months away, on November 23, with the possibility of being contacted earlier.

Last Thursday, there was a power outage in the community, so the mother sent Nathan and his two sisters to play as online classes were disrupted.

Nathan was riding his bicycle and a few minutes in, she heard screams and a commotion outside.

She ran outside, where she saw someone carrying him up the stairs and she noticed significant swelling on his forehead.

Her son had lost his balance and crashed down the stairs.

Nathan was admitted to Bustamante for one night and was seen by six ophthalmologists at the eye clinic the following day.

Even then, there was no change in the decision to schedule the surgery as an emergency.

“I don’t know what they consider as an emergency,” Henningham-Wanliss lamented, adding that they released him from the hospital.

His mother is also concerned about the possible psychological impact the situation may have on her son, as he is not able to lead a normal life.

“I don’t know what he is going through because he will come and say‘Mommy, I’m not seeing’or‘My eyes are hurting,’” she said in a soft voice.

His father, Orville Wanliss, told The Gleaner that his son often gets miserable because of the restrictions they have to place on him to preserve his sight until the surgery is done.

“To just sit and have Nathan lose his sight, it’s worrying,” he said as he appealed to the public for assistance.

At an appointment with a consultant who, on Monday, agreed to conduct the surgery privately, it was revealed that the nerve from the back of Nathan’s right eye was bent.

The consultant theorised that it was a deformity from birth that had not been recognised.

Corrective surgery is recommended to be done in the first five years of life.

The cost of the surgery and follow-up treatment is not yet available.

The family is praying for a successful surgery and is hoping that the damage to his eyes because of the delays will not be severe.

Despite Nathan’s vision troubles, his mother said that the affectionate boy does not fail to tell his sisters how beautiful they are.

“The day after we came home from the hospital last week, I was sleeping and I felt someone kiss me. I woke up and saw him smiling, and he said,‘Mommy, I love you.’He is just very loving,” his mother said.