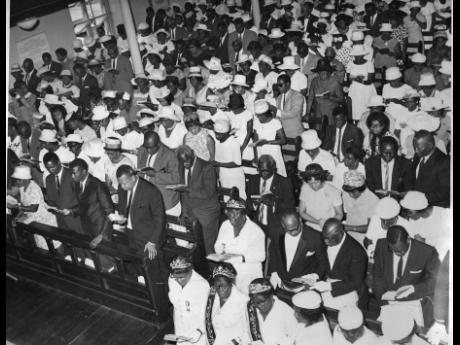 File
Prime Minister, the Hon. Hugh Shearer (fourth from left, front row) at the service on Sunday, April 7, 1968, at the East Queen Street Baptist Church, conducted by the Rev. J. A. Leo-Rhynie, in observance of a Day of Prayer occasioned by the death of the Rev. Dr. Martin Luther King.

The reverberations from the killing of Martin Luther King went well past the borders of the United States, much like the ripples from the civil rights movements in that country spread across the world. Jamaica was not exempt from either and Prime Minister in 1968, Hugh Shearer, expressed the country’s shock and loss. As Shearer puts it, Dr King was one of us.

THE PRIME MINISTER, the Hon. Hugh Shearer, said last night that he was shocked at the news of Dr. King’s death.

Said Mr. Shearer: “I have heard the sad and shocking news of the cold blooded murder of Dr. Martin Luther King, Jnr, which took place in Memphis tonight. Dr. King was an acknowledged and outstanding champion for human rights and had been engaged in the struggle to obtain these rights for the coloured people of the United States with a policy of non-violence.

“Dr. King was very well known and admired in Jamaica. He visited our country on a number of occasions on vacation, when he wished to take pause from his struggle and write his books, or on invitation. He enjoyed his several visits here and we were always happy to have him with us.

“Dr. King was energetic and sincere in the cause of racial equality and fundamental human rights. He was held in high esteem by all persons of goodwill throughout the world. Here in Jamaica where we value the things for which Dr. King stood, he was considered one of us. The murder of Dr. King, following so soon after the murder of President John Kennedy, is another inglorious chapter in the history of the United States, which as a nation, was founded on the high ideals and principles for which Dr. King lived and struggled and died.

The Government and people of Jamaica mourn the loss of this great man to mankind as a whole and extend profound condolences to his bereaved relatives.

We can only hope that in this year of human rights, Dr. King’s death, in such a manner will bring home to all people of the world, and particularly to the United States, the truth that bigotry, narrow-mindedness  and all the other evils of racial exclusion must be banished from the world if we are to establish and maintain peaceful relations among mankind.