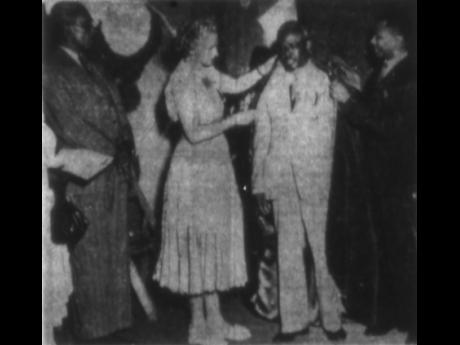 File
Mrs. Edna Manley and Mr. Vivian L. Virtue invest Mr. Clare McFarlane with the mantle of the Poet Laureate at the Ward Theater at the function arranged by the Jamaica Poetry League. Mr. William Seivright looks on.

The culture of the island called Jamaica has always been something that has produced worldwide interest. The poet laureate has, since the position’s inception, been one where the holder of the title is seen as something of a purveyor of that culture. That makes the announcement of each one, of national importance. This was understood as far back as 1968.

With the mantle of Poet Laureate new-draped around his shoulders and the emerald leaves of the lignum vitae forming the poet’s wreath upon his brow, John Ebenezer Clare McFarlane, O.B.E., J.P., F.R.S.A., issued a stirring call to service for Jamaica in the Ward Theatre yesterday afternoon.

He had just been crowned Poet Laureate of Jamaica, the second in the island’s history, the first to be honoured during his lifetime, the first of Jamaica’s sons to be accorded the distinction.

We must set up a tradition of service, without which there can be no worthwhile future for Jamaica, Mr. Clare McFarlane declared.  There was a tremor in his voice that spoke of a deep inner emotion as he spoke in acknowledgement of the honour accorded him an d the tributes paid by the speakers at the function.

“It would be strange”, he said. “If I were not deeply moved by what you have done this evening.”

“I accept very humbly and with deep gratitude the very great honour that you have bestowed upon me. It is indeed a great honour to have been singled out by my countrymen for a distinction such as this.