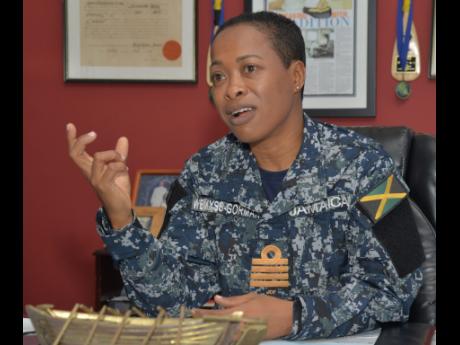 It is not often that a woman holds a high-ranking position in the army. However, Commodore Antonette Wemyss-Gorman has broken that stereotype and has gone on to create 'waves in the Jamaica Defence Force (JDF).

Wemyss-Gorman has continuously broken barriers and set trends, becoming a sort of standard bearer for women in armed services.

Wemyss-Gorman joined the JDF in August of 1992 and completed her professional development training overseas at the Britannia Royal Naval College, HMS Dryadin and the US Naval War College.

What followed was a 15-year career on the seas as a member of the JDF Coast Guard (JDFCG). In those 15 years the Commodore sailed the Caribbean, she was deployed to Haiti in support of JDF troops serving with the CARICOM Contingent in Operation “UPHOLD DEMOCRACY”, to The Bahamas and the Dominican Republic for exercise Tradewinds, as well as to Curacao and other islands on multiple military and diplomatic missions.

Her last assignment at sea was as Commanding Officer of HMJS SURREY, a 42-metre Offshore Patrol Vessel which she sailed on its maiden voyage from Gorinchem, Holland to Jamaica in October 2007. Under her command, the ship completed a rigorous trials programme, including the completion of Readiness Inspections and a variety of Sea Acceptance Trials, including an emergency Drydock to correct shipbuilding deficiencies identified. She holds a Master's Degree with distinction in National Security and Strategic Studies from the University of the West Indies.

Commodore Wemyss-Gorman has continued to be an integral part of the JDF even while ashore, taking on various critical appointments, including Unit Operations Officer, Officer Commanding Shore Base and Second in Command of the JDF Air Wing. She established and was appointed Commandant of the Caribbean Military Maritime Training Centre (CMMTC) in 2012. She developed the core courses of the Centre, including a flagship Bridge Watchkeeping Course for officers and the Naval Boarding Party course for enlisted, which, under her tenure trained over 300 persons from the JDF and local and regional partners.

Cmdre Wemyss-Gorman was subsequently appointed Commanding Officer of the JDF CG, and attained the rank of Commander, making her the first woman to rise to that rank in JDF history.

But Wemyss-Gorman has also found ways of contributing significantly, even outside of the JDF, earning other notable appointments, including a secondment to the Ministry of Transport and Works as Deputy Director for Marine Transport, appointments to the Fisheries Advisory Board, and the National COVID-19 Response Advisory Committee.

Promoted to her current rank in December 2019, Cmdre Wemyss-Gorman assumed the post of Force Executive Officer, providing Force development guidance in support of the transformation vision of the Chief of Defence Staff.

She has also received an award for distinguished leadership by the United Nations Women Leadership Initiative (WLI) in 2015.

In May 2019, Cmdre Wemyss-Gorman was honoured by the Women in the Caribbean Maritime Association for her contribution to maritime security in the region.