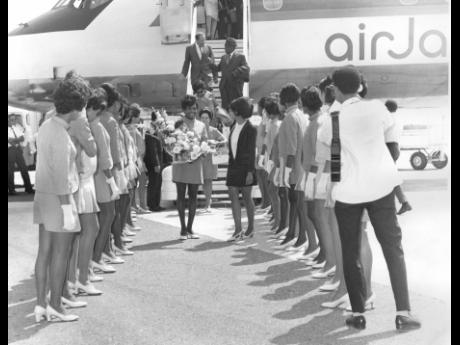 File
The Hon. Cleve Lewis, Minister of Communications and Works(at right on steps) and Dr. Herbert Eldemire, Minister of Health, who made the trip down from Montego Bay on Air Jamaica's inaugural New York-Jamaica run on April 1, 1969, disembarking at the Palisadoes Airport. The special guests and passengers on the inaugural flight were greeted at Palisadoes by the bevy of pretty Air Jamaica hostesses seen in the picture.

The year was 1969 and Jamaicans the world over had every reason to be proud. In that year, Jamaica’s national airline, made it’s first run between United States and the island. The achievement was immense and the hurt to the national pride at the cessation of Air Jamaica’s operations some 46 years later, suggests the importance of having an airline, was not lost on even those too young to remember its nexus.

JAMAICA’S NATIONAL AIRLINE, Air Jamaica and its new junior partner, Air Canada, had their inaugural services between Jamaica and the United States yesterday.

The function at the Palisadoes International Airport to mark the event on the occasion of the New York-Jamaica run was attended by a cross section VIP’s, and accompanied by pageantry.

Yesterday afternoon when its newly-acquired Super DC-8 (stretch) jet touched down on the Airport tarmac at 2:15 o’clock, it was to the strains of “Tek mi to Jamaica where di rum come from” by the Jamaica Military Band, who had been entertaining  the guests before its arrival.

The special guests and passengers were greeted when they came off the aircraft by the chairman of Air Jamaica, the Hon. G. Arthur Brown, and Air Jamaica hostesses in their vari-coloured outfits.

The Governor-General, Sir Clifford Campbell, described the occasion as “a red letter day in the history of civil aviation in Jamaica”. He said that he hoped Air Jamaica would stand up to the test of time and live up to its responsibilities. The second speaker the Hon. Cleve Lewis, Minister of Communications and works, under whose portfolio  Civil Aviation Department falls, in extending greetings, asked the other carriers to make the competition remain healthy. He said it was not unusual for airlines  to try to “pull last tricks on one another”. He asked the other carriers “to work with us because we are willing to work with you…but do not let us have any cut-throat competition.”

The minister of Trade and industry, the Hon. Robert Lightbourne, under whose portfolio tourism falls, in welcoming the new partnership, said he hoped it would contribute to the broadening of the Jamaican economy.

On the same trend, Sir Neville Ashenheim, Leader of Government Business in the Senate, said he regarded Air Jamaica as the handmaiden of the tourist industry, and that with it as a tool, it will be able to bring in visitors from points where other carriers have not been venturing.

Jamaica’s Ambassador to Washington, Sir Edgerton Richardson on replying on behalf of the guest said he also looked forward to Air Jamaica expanding its routes, and to the day when it will become “the lifeline of Jamaica”

The Mayor of Kingston, Mr. Eric Bell, performing his first public duty said that the municipality  was willing to play its part in the new venture and that it was open to any suggestions to improve the amenities and services for visitors to the city

The final speaker, Mr. J. Baldwin, President of Air Canada , said the partnership would be of benefit to both Canada and Jamaica  and Air Canada had gone into it because it believed in Jamaica.

Chairman of the proceedings was the Hon. G. Arthur Brown and blessing were said by the Anglican Bishop, the Rt. Rev. J. C. Swaby. Lady Campbell, wife of the Governor General who was present was presented with a bouquet of roses by an Air Jamaica hostess.

For its new operations Air Jamaica has acquired three new jets –  a DC-8, the largest commercial jet operating in the world at present with its 193 passenger capacity, and two medium size Super DC-9s with 98 passenger capacity each.

The DC-8 will be doing a New York and return run once daily, and the DC-9s will be going and coming from Miami thrice daily.