Jamaica’s second Prime Minister, the first to die in office 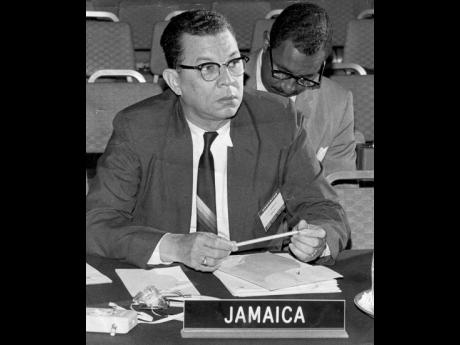 The face on Jamaica’s $100 note provides an interesting story among the many that make up Jamaica’s history. Sir Donald Sangster was the second Prime Minister and here The Gleaner tells part of his story, many probably wish had gone another way. You see, Sir Donald died just months into his first term as Prime Minister of Jamaica after helping to lead the Jamaica Labour Party into their second term in office after independence.

Sir Donald Sangster is dead. Jamaica's second Prime Minister, and its first elected since Independence, died at 12.45 p.m. yesterday in the Montreal Neurological Institute, Canada, where his strong constitution had been fighting a losing battle against brain haemorrhage since March 22.

Death came to Donald Burns Sangster, the quiet, unassuming Jamaican who rose to the highest position in the land, just four months after he finally became Prime Minister of Jamaica in his own right.

An announcement issued in Montreal and in Kingston by the Government of Jamaica told a waiting world that Sir Donald had died. He did not awaken from the coma into which he had lapsed on April 1.

So came to an end the long and gallant struggle which Sir Denald had put up for life, after being stricken at Newcastle, in the hills above Kingston on March 18. Rushed to Canada two days later, he lay critically ill for 20 days, attended by a team of medical specialists.

For 34 years, the 55-year-old lawyer served Jamaica. Twenty of those years were served under the leadership of Sir Alexander Bustamante, dominant figure on the Jamaican political scene since 1938. It was faithful loyal, uncomplaining service.

For years, he acted as Prime Minister for the aged and ailing Sir Alexander. It was only in February of this year, at the General Election for the Hoses of Representatives, that he come into his own-becoming Prime Minister in name as well as in fact, as the result of the Jamaica Labour Party’s victory at the polls.

Born October, 1911, the son of a land surveyor, Sir Donald was educated at Munro College. Admitted as a solicitor of the Supreme Court in 1937, he served to various posts, including chairman, on the old St. Elizabeth Parochial Board prior to his entry in Parliament in 1949 as a member of the Jamaica Labour Party.

Sir Donald lost his St. Elizabeth parliamentary seat by 2355, but re-entered the House later that year when he won the by-election for a vacant seat for a Clarendon constituency.

With this reverse behind him, Sir Donald's political star rose steadily. He became Minister of Finance and Leader of the House in 1953, during the life of the Labour Government of 1949 – 54. When the party returned to power in 1962, he resumed both offices.

Overseas, he gained prestige in the Commonwealth Parliamentary Association, serving as its chairmen in 1964. He also made a name for himself in International financial and economic circles as Jamaica’s principal representative and spokesman on the International Monetary Fund and the World Bank.

As his country’s most experienced Minister, with exception of Sir Alexander; Donald had hoped to guide Jamaica future as its new Prime Minister. But this was not to be.

From King’s House to the humblest hamlet, the nation grieved at the loss of one who held such promise as a leader and a statesman. Everyone echoed and endorsed the poignant words of the Governor General: “This to all of us is an irreparable loss. All that we have to do now is to close our ranks and to continue to work for Jamaica.”