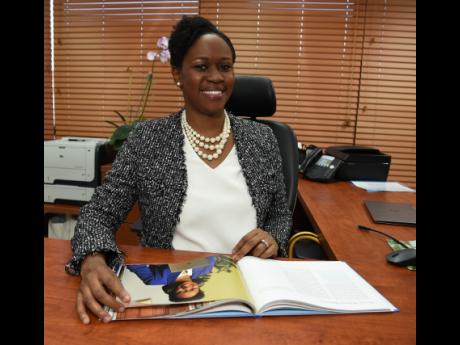 Mariame McIntosh Robinson, known for her poise and keen intellect, became part of The First Global Bank in Jamaica as President & CEO in 2016.

Her appointment came along with a very noticeable transformation in the operations and fortunes of First Global. But before becoming one of only five women to head operations of commercial banks in Jamaica, McIntosh worked as a Strategy Consultant for eight years with Mckinsey & Company in the Atlanta office in the United States. She also had a stint as manager of Bain & Company’s New York office.

Following those stints, McIntosh Robinson spent seven years as a private equity investor and was a partner at Portland Private Equity, the largest private equity fund management company focused on the Caribbean region, successfully managing portfolios numbering in the 100s of millions of US dollars.

McIntosh Robinson serves as a Trustee on the board of United Way Worldwide as well as on several private and public boards in Jamaica and Barbados. The banking mogul is also the board chair of TEACH Caribbean, an educational NGO she co-founded in 2006 with seed financing from Rhodes Trust to provide access to quality education for economically disadvantaged youth.

McIntosh Robinson has a bachelor’s degree in Electrical Engineering from Massachusetts Institute of Technology MIT, an MBA from Harvard Business School, and an MPhil in Economics from Oxford University where she attended as a Rhodes Scholar.

Married with one son, McIntosh Robinson had an auspicious start, earning her bones as a leader at the Immaculate Conception High School where she was head girl.