PM not looking for handouts from hoarders 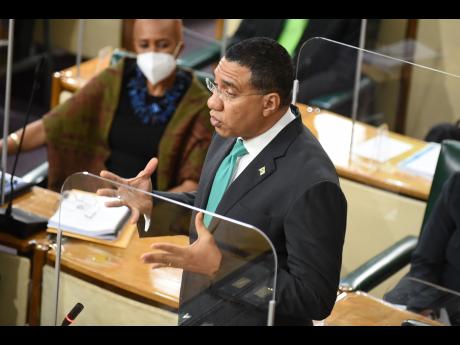 In the middle of a row over class and how the current Prime Minister views those less fortunate, there was a sliver of light. Breaking through the crevices of a distasteful argument - the sometimes not-so subtle evidence of classism in our society - Andrew Holness faced the rest of the world with a stiff upper lip, and said, ‘look, we’re not asking for handouts in the form of COVID-19 vaccines, we will pay for it.

FOR THE next three weekends ending May 4, partial lockdowns will be implemented with curfews beginning at 4 p.m. on Saturdays and 2 p.m. on Sundays to 5 a.m. on Mondays.

“For those people who are pushing in all forms of media a class war, a social war, an anti-vaccination war … if you get ill, go to them and ask them to pay your doctor bill.You can’t find any of them – they push their ideas in anonymity,”he said.

“The positivity rate is decreasing, yet the death rate is increasing – something is not right,”he observed.

Meanwhile, without naming anyone or particular group, the prime minister charged that“persons who have a microphone in front of them, some who are very influential and should know better,” were peddling ideas that, he said, could mislead unsuspecting persons.

“If anyone believes that by dint of the loudness of their voice or their popularity that they are going to shut up this prime minister from telling the truth about what we need to do, think again,”he said to applause from the government benches.

Golding said the lockdowns had a negative impact on those who eke out a living daily, noting that if a policy of lockdowns was being used to manage the pandemic,“we must put the resources in place to allow those people to survive”.

Meanwhile, the prime minister said that the 75,000 doses of Oxford AstraZeneca vaccines from the Africa Medical Supplies Platform, which had an April 13 expiry date, had all been administered.