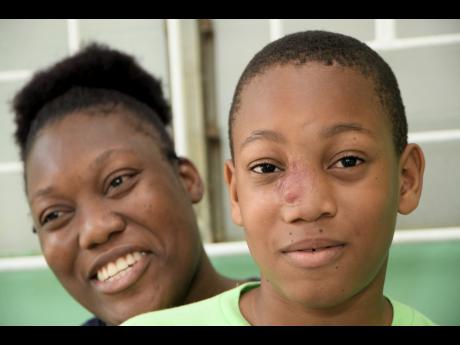 Rudolph Brown/Photographer
Susan Gordon is seen with her son, Jabari Osborne, who has a rare condition, arteriovenous malformation. After a Gleaner story on Wednesday, donations flooded in to finance his surgery overseas.

Together, ‘Yes we can’, the words of former US President Barack Obama rang true in Jamaica this week, as no sooner had the story of a mother’s struggles to help her ailing son broke, than Jamaicans – still hurting from the financially debilitating process of trying to save lives in the fight against COVID-19 – dipped into their pockets to help. The story is heartening, not just because we are close to seeing a little boy get relief from an altogether untenable situation, but because it shows there are still good people all throughout the island of Jamaica.

WHEN THE family of Jabari Osborne was notified that they had met their goal on a GoFundMe account at 10:20 p.m. on April 15, they exuded joy that their hope of surgery would become a reality.

“It’s a very late birthday gift but this is the best birthday gift I’ve ever gotten in my life,” said the boy’s mother Susan Gordon, who celebrated her birthday on Monday, April 12.

Overwhelmed with gratitude, the 30-year-old gushed with unbelief that the target of US$32,500 was met in just 48 hours through the compassion of strangers.

Just over US$35,000 has been donated to fund Jabari’s surgery and fare to the Vascular Birthmark Institute (VBI) at the Lenox Hospital in New York.

Jabari was diagnosed with arteriovenous malformation (AVM). The condition could be fatal as it results in abnormal tangling of blood vessels that connect arteries and veins and disrupts normal blood flow and oxygen circulation.

The 10-year-old’s life has been severely altered by fear of the lump rupturing.

Jabari has also been battling depression from attacks and jeers from peers and adults.

Gordon has also been accused of abusing her son.

The mother and son share worry as Gordon herself has been living in pain with a brain tumour that has caused seizures and fainting spells.

After the initial excitement of reaching the target, Jabari’s focus immediately turned to getting help for his mother.

“Mommy, I am really happy I get to get this thing off my face, but I want you to get your surgery, too,” Gordon reported her son as saying.

Gordon and Jabari’s aunt, Karen Osborne, who started the GoFundMe account, explained that many have reached out for them to expand the goal to include Gordon’s need. However, they are still unaware of the cost to remove the tumour.

“I wouldn’t want to ask people for more than I will need,” Gordon said.

Osborne explained that people are still donating to Jabari’s account and that extra funding will be channelled towards the recommended minimum 10-day stay at the recovery centre.

While expressing gratitude to donors, the aunt has created an Instagram account, about_Jabari, to keep everyone updated on his journey.

Though Gordon was scheduled to undergo surgery at the Kingston Public Hospital in August, her appointment in January was cancelled and she has no clear word on the next step.

She will be consulting with the chief of neurosurgery at the same hospital that will be attending to her son.

“Right now, my goal is to get Jabari’s surgery done first. I would want to be there when he is doing his, and once I find out that he is good and stable, then I will do mine,” she said.

Jabari’s father, Howard Osborne, remains in shock at how fast the target was met. Now he wants Gordon to have the same favour as his son.

“Sometimes I think he is more worried about him mother than about his situation,” Mr Osborne said.

Once they receive updates on the meningioma in Gordon’s temporal lobe, Jabari’s GoFundMe account will be edited with Gordon’s information, including the cost for the procedure.