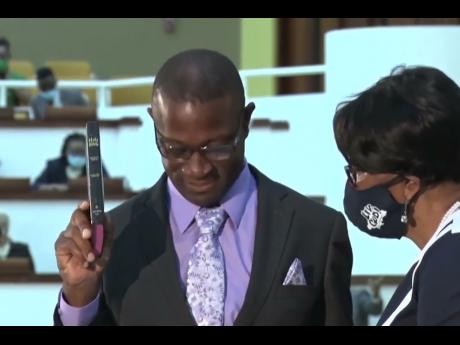 There is no doubting the hit the Jamaica Labour Party has taken over the George Wright affair, with protests, public figures and even some not-so public, chiding them for, being too light on a Member of Parliament, who it is alleged committed an act of violence on a woman. But, for The Gleaner, out of the muck can rise the phoenix of change. While there may be no relief for those who deal with the trauma of abuses already suffered at the hands of the powerful, there may be a way to make those abuses less likely, at least at the hands of those tasked with protecting our developing nation.

Opportunity from the Wright affair

NO ONE would claim that last week’s ruling by House Speaker Marisa Dalrymple-Philibert in the George Wright affair was based on anything other than conviction and principle, rather than a tactical move to help her party and the Government manoeuvre out of a bind. But her decision to prevent the Opposition from tabling a motion for Mr Wright’s suspension and for the matter to be sent before Parliament’s ethics committee may now mean – unless the Speaker backtracks – that the government MP is able to avoid potential censure.

Yet, all may not be lost. For, if the Parliament believes it should have a say in how its members conduct themselves, even in matters not directly related to their roles as legislators, or do things that offend public morals, then the Wright issue provides a platform for a debate on the clarification of the rules, and, if necessary, an expansion of this authority. At the same time, it might be an opportunity to broaden, and give added relevance to the office of the political ombudsman, which would be renamed the parliamentary conduct commissioner and given the power to independently investigate public complaints of misbehaviour by legislators. The role would be similar to that of the Parliamentary Commissioner for Standards of the UK Commons.

George Wright, the member of parliament (MP) of Westmoreland Central, a former local government councillor, came to Parliament on the wave of the Jamaica Labour Party’s (JLP) landslide victory in last September’s general election. He had been hardly noticeable in the House until the recent viral, grainy video of a man severely beating a woman, and public claims that the man is Mr Wright.

The MP has neither publicly confirmed nor denied that he is the person. The video, though, generated outrage and poignancy, coming in the midst of raging debate, on which Parliament has weighed in, on violence against women. But a number of developments leads to a not-unreasonable inference of Mr Wright’s involvement.

The police confirmed that on April 6, Mr Wright and a woman separately filed complaints of assault, each against the other. Neither followed up on their initial action. Then, in the middle of the debate of the matter, and the police saying they had been unable to contact the MP, the JLP called on Mr Wright to make himself available to the constabulary, which he subsequently did.

It is against this backdrop that Opposition MP Anthony Hylton attempted to table the ethics motion against Mr Wright, which was short-circuited by Speaker Dalrymple-Philibert on the basis that it was premature and offended the Standing Orders, the rules by which Parliament governs itself.

While saying that “this Government and this Parliament” did not condone domestic violence, Mrs Dalrymple-Philibert emphasised that she was unable to identify anyone on the video and that the “police have not charged, and they have not identified anyone”. That, she argued, supported her less expansive interpretation of Standing Order 73 (g) that gives the ethics committee the authority of “receiving and investigating any reports of civil or criminal proceedings being instituted against any Member and making appropriate recommendations to the Speaker of the House”.

This, in the face of subsequent developments, could be the end of the matter, including the announcement by the police that they ended their investigation, given their inability to positively identify the people in the video and the failure of both the woman who had complained against Mr Wright, and the MP himself, to be “forthcoming in connection with this probe”.

In the meantime, although he has neither been suspended or expelled from the JLP, the party announced that “Mr Wright will withdraw from the Government’s parliamentary caucus in light of unresolved allegations circulating in the public domain”. He will, therefore, sit as an independent member of the House.

None of this fundamentally shifts the needle on the Speaker’s ruling. Not identified or charged! Yet, the party, with 78 per cent of the members of the House, has implicitly indicated that it believes Mr Wright faces genuine questions about his conduct or ethics that demand, at least for now, that he be distanced from his colleagues.

In the face of this conundrum it is urgent, if it is to be assured of the confidence of the public, that Parliament establishes clear parameters for the type of issues for which it will call its members to account, and how it will do this. The power of Parliament to regulate its affairs, including the authority to sanction members, is well established. What, in our case, is lacking is a codification, and updating, to take into account current circumstances of offences that would trigger a conduct review. Neither is there a mechanism to ensure that grievances not raised by legislators can be investigated, without the complainant getting short shrift, or the accused member being insulated by colleagues.

Several years ago, in the face of the pay-for-questions scandal, the British Parliament began an overhaul of its ethics arrangements, leading to, including other things, the independent commissioner of standards, who investigated certain complaints and recommended actions to the committee on standards. The mechanism could be tweaked for Jamaica, with the role being undertaken by the reconfigured and renamed political ombudsman, an office that has similar functions with respect to politicians on the hustings.