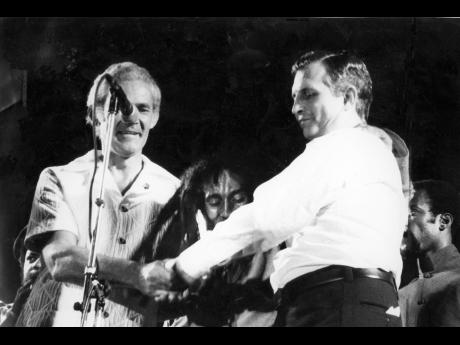 File
Bob Marley (centre) urges then Prime Minister Michael Manley (left) and then Opposition leader Edward Seaga, to shake hands at the One Love Peace Concert at the National Stadium on April 22 1978.

Reggae icon Bob Marley, not long after being shot, went to the ‘One Love’ concert and famously, and maybe heroically, got Prime Minister Michael Manley and Opposition leader Edward Seaga, to hold hands in a display of unity that belied the bitter violence that had gripped the island ahead of the 1980 election, to this day considered the most bloody in the country’s history.

PRIME MINISTER Michael Manley and Opposition Leader Edward Seaga locked hands and danced a short jig as the curtain went down on Saturday night’s “One Love” concert, in aid of the peace efforts at the National Stadium.

A full moon dodging between patches of dark clouds dangled overheads some 25,000 people including the two political leaders, Minister of National Security Senator Dudley Thompson and his Opposition rival, Senator Winston Spaulding, were treated to a marathon trouble-free show climaxing with the performance of International Reggae star Bob Marley.

Superstar Marley was close to the end of his 45 minute performance when he requested Mr. Manley and Mr. Seaga to join him on stage.

It was Mr. Seaga who got up first. He walked to ten-foot high stage, held out his hands and was hauled up by peace initiator Claudius Massop and a stage band.

A few minutes later, Mr. Manley joined the opposition Leader on stage. Bob told them to shake hands, they gave a firm handshake, before gripping Bob’s hand and all three held up for the crowd to see a pyramid shaped grip of hands as Bob belted out the show’s theme song “One Love”.

Rastafarians ran onstage with a lighted chillum pipe used in smoking ganja and started passing it around to the dozens of people who had joined them. Senator Thompson watched the proceedings from his reserved seat. After the song ended, Mr. Seaga and Mr. Manley walked in different directions to their seats.

Just 90 minutes before a former member of Bob’s group, the Wailers, singer Peter tosh, had given a tongue lashing to the political leaders. Tosh coloured his protest with indecent language as he called on the Prime Minister to “free ganja smoking”.

Said Tosh at one stage: “I talking to you Mr. Prime Minister, because you said that you and I are friends, right? So you say. You too Mr. Leader of Opposition. If it was me alone every Police Station could a lock up and the Policemen go home, yet I and I brethren end up a jail for a little bit a ganja”.

He also called on them to protect the country’s national resources as well as safeguarding equal rights and justice for the whole nation.

At one stage Tosh was handed a cigarette which he smoked between verses of his song before passing it back to a member of the audience.

During the Inner Circle’s performance, singer Jacob Miller called the peace initiator onstage to join him in a “ring a roses” dance, as he did his song “Peace Treaty”.

Beresford Hammond, in his first major stage appearance, backed by Harold Butler and Willie Lindo, won approval for his rendition of “I Miss You” and “One Step Ahead”.

Big Youth had a message of peace and love and got it across to the audience via his “Isaiah Prophet of Old” and “Peace at last”. Dennis Brown got through to the crowd with his final song “How Could I Leave”. Ras Michael and his sons did not stay on long but in the short time they were there the band and a group of dancers kept a lively pace.

Bob and Peter excelled. Bob Marley did several well known tunes like “Trench Town Rock”, “War” and “Natty Dread”. He had with him his band the Wailers plus hornsmen, David Madden, trumpet and Glen DaCosta, saxophone, as well as the I Threes singing group. Peter’s band featured Al Anderson, who just last year was replaced by Junior Marvin as Marley’s lead guitarist and Robert Shakespeare on bass and Sly Dunbar on drums. Guitarist Earl “China” Smith played with the Wailers, Ras Michael and Big Youth’s band the Ark Angels. The Mighty Diamonds did three songs.

Comedian Prince Edwards was popular with the crowd. The Inner Circle delighted with lead singer Jacob Miller extracting a great deal of reaction from the crowd with his acrobatics. They did songs like “Forward Jah Jah Children” and “Shaky Girls”. The crowd kept calling for a repeat from little Junior Tucker, after he had done Michael Jackson’s “Happy” and Natalie Cole’s “Mr. Melody”, but despite the shouts there was no time for Junior’s encore.

Also appearing on the show were, the Meditations, We The People band, Althea and Donna, Bongo Herman, Leroy Smart, Culture. Masters of Ceremony were Neville Willoughby and Errol Thompson. Lighting and sound were by Cameron of Miami. Tommy Cowan was the producer. He was assisted by Copeland Forbes.

The show was produced by the Central Peace Council in aid of its employment projects and in commemoration of the 1966 visit to Jamaica of Emperor Haile Selassie.