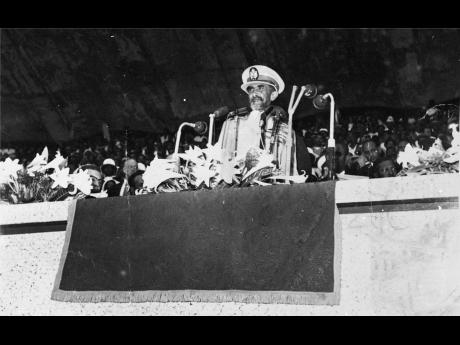 File
HIS IMPERIAL MAJESTY Emperor Haile Selassie I of Ethiopia replies to the address of welcome by Acting Prime Minister Donald Sangster and the address from the Commissioners and citizens of the Corporate Area, during the civic reception in his honour at the National Stadium on April 21, 1966. 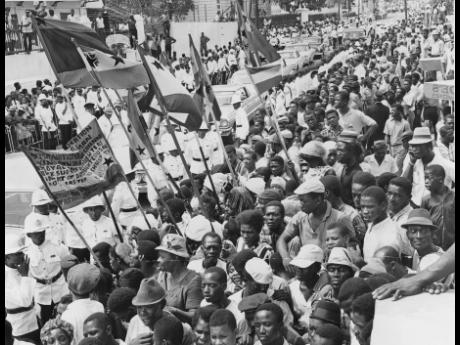 Coming from near and far, Jamaicans helped make the visit of Haile Selassie I, Emperor of Ethiopia, a moment that would be etched in the collective memory of both countries for the next 55 years. Selassie, himself, cried. The Gleaner captured those tears and the monumental nature of the moment in black and white.

HIS IMPERIAL MAJESTY, Haile Selassie I, Emperor of Ethiopia, King of Kings, Conquering Lion of Judah, arrived in Jamaica yesterday afternoon to a welcome of superlatives. And he wept. He cried as he stood on the steps of an aircraft of Ethiopian Airliner which had brought him from Trinidad and Tobago to Jamaica and surveyed the vast and uncontrollable crowd which had gathered at the Palisadoes Airport to greet him. The tears welled up in his eyes and rolled down his face." It will perhaps never be known whether he cried in sorrow at the uncontrollableness of the vast throng of Jamaicans who gathered to meet him, or out of pure joy but whatever it was, it was an emotional reaction to a highly emotional welcome.

Because from Wednesday night people had gathered at the Palisadoes from all parts of Jamaica, coming on foot, in cars, in drays, in carts, in trucks, hired buses (including JOS buses), on bicycles and by every means of transport that can be imagined, and there never has been such a vast crowd at the Palisadoes Airport at any time: and there never has been in the whole history of Jamaica such a spontaneous, heart-warming and sincere welcome to any person, whether visiting Monarch, visiting VIP or returning leader of any Jamaican party.

Of the welcome, His Imperial Majesty said later that he was overwhelmed and deeply moved. It demonstrated, he said, the close ties and affection which bind the people of Jamaica to Africa and Ethiopia.

They came from the hill distances of Accompong, from the Irish top country of Moore Town in the John Crow Mountains. They came from Vere and Milk River, from Johnson Mountains in St. Thomas, from little villages and big towns all the way across from Negril to Morant Point.

And they brought with them thousands of colourful Ethiopian flags and bunting, palm leaves, firecrackers, thunderbolts, drums and the Abeng – the famous bullhorn of the Maroons which have echoed across the hills of Jamaica (and in Africa during the wars of the Ashanti) from time immemorial.

And the enthusiasm was too much for mere authority. The police were surrounded by the tide of it all. The military only were able to keep some resemblance of order and this perhaps because they were armed with bayonetted rifles. The result: All prearranged ceremony went by the way. People were not presented; the red carpet was ignored; anthems were not played; the Emperor was in fact hurried in nervous haste to the Governor-General’s car to make his triumphant entry into Kingston, the capital city of Jamaica, and to start what must have been the biggest traffic snarl in the history of the city. And while this was being done firecrackers were cracked, thunderbolts thundered, the sounded and thousands of people shouted: "Hail the Man”.

Everything was unprecedented. Apparently no one in charge of the arrangements knew what would have happened and no precautionary measures had been taken.

Emperor’s plane due to arrive in Jamaica at 11:00 am was delayed by a stop in Barbados, It actually arrived here at 1: 35 pm and by the time it had taxied up to the reception area, it was 1:40 pm. By then it was bedlam.

Hundreds of Rastafarians had crashed the VIP line of Cabinet Ministers and leading members of the Opposition and were weaving hither and thither under and around the aircraft not caring at all for still turning propellers. And by the time the Emperor and his party appeared on the landing way everything was out control.

It was not until 2:15 pm that the Emperor was able to leave the aircraft and board the Governor-General’s car and beat a hasty retreat from the tumultuous area that was the Palisadoes Airport.

Before that it had been raining. But the rain did not stop the dancing and flag waving of many Rastafarian groups which thronged the airport. Many shouted: When God comes, the sun will come out”. It did.

While the rain had been pouring, all sorts of arrangements were made by the Acting Prime Minister, the Hon, Donald Sangster, and the Acting Deputy Prime Minister, the Hon. Robert Lightbourne, for presentations to be made in the alternative, firstly at King’s House, secondly in the walk-way to the passenger-leaving gates, and finally to what had been arranged originally, outside on the tarmac. But it was not to be.

As soon as the plane touched down; the rains ceased, the sun came out from behind its clouds and the crowd erupted everywhere and there was a roar such has had never been heard at the Palisadoes before as the first African head of State to visit Jamaica since Independence appeared at top of the landing steps.

For a while it was thought that ceremonial could be continued as planned. The Emperor and his party stood at the top of the landing steps, while top Jamaican military officers blocked the bottom, and looked down on the milling crowd as other military officers (the police were already wholly discomfited) tried to obtain some order out of the chaos.

The Ethiopian Ambassador to Haiti, His Excellency Getachem Kekele (who with Major Trevor Robinson, the Jamaican Equerry to His Imperial Majesty had been the first to board the plane to greet the Emperor) went and fetched Mr. Z. Munroe Scarlett (dressed in Indian garb) to speak to the crowd and to seek order so that the Emperor could disembark.

It would have been the greatest fully to allow him to land at that time because everybody wanted to touch him. The cries were everywhere: “The day has come. God is with us. Let me touch the hem of his garment”.

With the military, and the police helping, the way was made but the pre-arranged ceremony had to be abandoned. The Emperor and his party, closely packed in by Brigadier David Smith, the Commissioner of Police, Mr. A.G. Langdon, Colonel Dunstan Robinson and other top military officers moved swiftly through the crowd in the space that had been cleared and with the Governor General His Excellency Sir Clifford Campbell, the Emperor Haile Selassie entered the gubernatorial car and made a difficult way out of the Palisadoes Airport.

The Acing Prime Minister and other Ministers of Government as well as other members of the Emperor’s Party followed.

As the Governor General’s car moved off, people continued to mill around it and to place themselves in its way,, some shouting: “Remember me, Prepare a place for me in thy Kingdom”.

And for some three hours after, the Palisadoes Road and the Windward Road were the scene of a traffic snarl that kept cars in slow and frustrating crawl, all the way from the airport to South Camp Road.

The airport programme should have been: the arrival of the Emperor and party reception by the Governor General, twenty-one gun salute, presentation of Lady Campbell, the Acting Prime Minister, the Chief of Staff, the Anglican Bishop of Jamaica, the Bishop of Kingston, the Chairman of the Jamaican Christian Council, members of the Cabinet, the President of the Senate, the Speaker of the House of Representatives, the leading judges, the Dean of the Diplomatic Corps, the Leader of the Opposition and their wives. Only twenty-one guns were fired and with each salvo there were thunderous roars of “Hail the Man I”. Neither the Jamaican National Anthem nor the Ethiopian Anthem was played. Everything had broken down. All ceremony had been abandoned.

The confusion continued all the way to King’s House. Police barriers were broken. The royal entourage became disunited. Policemen were pushed aside. Enthusiasm was high all along the route. No other person visiting Jamaica had ever received such enthusiastic ovation and such a disorderly welcome.

And while it was more controlled, the situation was the same as the National Stadium when the Emperor went there at 5:00 p.m. for a national and civic welcome. The abeng there was stentorian, disturbing at times, the nation’s welcome spoken by the Acting Prime Minister, the Hon. Donald Sangster, the city’s welcome spoken by Town Clerk, Mr. Glaister Duncan and the Emperor’s reply in Amharic, translated later into English by a member of his staff.

And the abeng kept up a steady threnody during the entire afternoon’s performance keeping the vast crowd which had gathered at the National Stadium from very early in the day at fever pitch that developed into complete disorder by the time the Emperor and his parting were departing. There was no controlling the crowd that milled around and stormed Marathon Entrance of the National Stadium.

Throughout the entire day of April 21, no Jamaican leader was particularly noticed. Some, including Church leaders, who had been invited to the Palisadoes Airport to greet the Emperor left as soon as the disorder began with shouts of: “Go, this is not your day. This is our day. God is here.”

In the night, there were extra police on duty at King’s House as the Emperor attended a State Dinner, met Heads of Missions accredited to Jamaica, Senators and other members of Parliament and their wives, and a state reception attended by thousands of people.