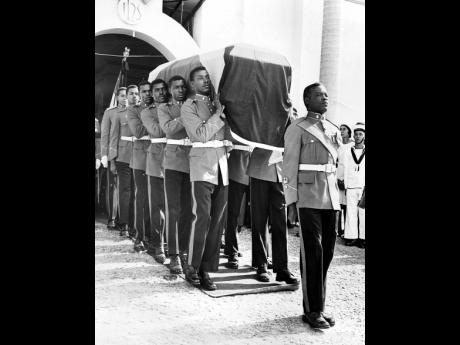 File
The Jamaican Regiment takes the casket bearing the body of Sir Donald Sangster from the Kingston Parish Church on April 18, 1967.

The funeral of Sir Donald Sangster was no small matter. Marking the occasion in a most fitting way was The Gleaner’s coverage of the funeral. The gravitas of the occasion was not lost on the writer, neither was the esteem with the man was laid to rest.

… Beneath the green willows they buried a nation’s hero

SIR DONALD SANGSTER was given a hero’s burial yesterday afternoon. All Jamaica paused for three hours to pay homage and final tribute to him as he was laid to rest with the highest honours that a mourning nation could give him.

Climaxing six day of national mourning which began when he died last Tuesday in Montreal, the State Funeral for the late Prime Minister was a massive tribute to the son of St. Elizabeth who became his country’s political head. One of the largest crowds ever to attend  an occasion of this kind in Jamaica filled the Kingston Parish Church for the burial service. A monster crowd of ten thousands swarmed George VI Memorial park for the burial.

Kingston was the focus of the nation’s grief. As the flag draped casket bearing the remains of 55 year old national leader made its slow and sorrowful journey through the streets  of the nation’s capital, all Jamaica  joined in hushed reverent attention to the last salute to one of Jamaica’s beloved sons.

After its sombre movement across Jamaica for two days last week, following its return to the island last Thursday , it was to Kingston that the body of Donald Sangster came, in its huge silk-lined casket of polished wood and gleaming bronze. And it was in a Kingston of shuttered shops and silent streets of mourning flags drooping at half mast that he went on his last journey to the grave.

But in the midst of the melancholy of his funeral  there were notes of exaltation. Jamaica rose to its highest point of national emotion in joining  as one to pay universal and heart-felt honour to one who, in death had risen above partisan politics to be acknowledged in the words of Canon R.O.C. King’s eloquent and moving eulogy as “statesman, humanitarian, friend and Christian”.

And Jamaica, through its government and its armed forces made the State Funeral an occasion  of befitting pomp and ceremony. Military bearers did duty at the church and grave, military units marched in the solemn procession through streets. The service at the church, conducted by the bishop of Jamaica the Rt. Rev. Percival Gibson was deeply stirring . The ceremony at the grave was crowned with the poignancy of Army buglers sounding the Last Post.

Led by the Prime Minister the Hon. Hugh Shearer and by the governor General Clifford Campbell, the whole nation met in sorrow at Sir Donald’s funeral. A quarter of a million people - half of Kingston’s population, thronged the park. Political rivalries forgotten, men and women met in common grief and shared a national loss.

Then, when the last blessing had been pronounced and the grave piled high with wreaths, they filed slowly and quietly and sadly out of the park, now a consecrated ground in which future Prime Minister will also be given a State Burial. They left Donald Sangster alone, sleeping his last sleep in the good earth of the Jamaica which he loved and served faithfully until death.

Jamaica’s last hour of mourning for Sir Donald began with the burial service in the historic church of St Thomas the Apostle, more commonly known as Kingston Parish Church. The white walled church with its classic cruciform construction was filled to capacity when the peal of organ signalled the entry of the procession of Ministers for the start of the service.

For half an hour before, the dignitaries and officials and mourners had been arriving  - members of the cabinet, members of Parliament, the representatives of foreign Government, judges, civil servants,   Custodes, Mayors - the whole panoply of the body politic of Jamaica

Under the high ceilinged white-painted dome of the church, the huge casket stood on a black catafalque. It was draped in the green, gold and black of the Jamaican flag: and resting above, on a black velvet cushion was Sir Donald’s K.C.V.O. Insignia with its ribbons of blue, red and white.

White lilies adorned stands placed near the bier, and massed in quiet beauty above the altar. Four tall  white candles in tall wooden holders , stood silent around the high catafalque. Near it the Sangster family, heavy with grief, sat in a special place of honour.

Outside, a huge crowd crammed the northern side of South Parade, facing the church. The gun carriage, which was to head the cortege in the procession to the park, was drawn up in readiness. And, at East Parade, the guard of honour of the First Battalion of the Jamaica regiment waited, their scarlet tunics making a vivid splash of colour in the bright afternoon sun.

Soon, the soft notes of the organ crept into silence of the waiting church. The purple-gowned choristers took their places. The church bell in its tall tower began a mournful tolling. And so the majesty and the glory of Donald Sangster’s funeral mounted as the hands of the clock moved towards 3 p.m. for the start of the service.

Ritual and ceremony combined in the service. The traditional twenty third Psalm gave its message of faith and hope. The Prime Minister read the lesson, taken from Revelations, on which John the Divine spoke of the promise of the afterlife. Canon King eloquently expressed the nation’s praise for its noble departed son. Prayers were said for those who have gone, and for those who mourn. Time-honoured funeral hymns were sung.

Then, after the solemn singing of the first verse of the National Anthem, the cortege moved out of the church to the sad music of Handel’s “Dear March”. The casket was borne by the red-coated soldiers to the gun carriage, the serious-faced Cabinet Ministers took up position on either side of the casket; and the cortege started its slow procession to the park, with the drums of the massed bands repeating the mournful theme of the “Dead March”.

Along East Queen Street and then up Duke street the cortege went. And it was fitting that Donald Sangster should make his last journey through Kingston on a street that played such a significant role in his life. He passed headquarters House and Gordon House, honoured scenes of his parliamentary career. He passed the Headquarters of Bustamante Industrial Trade Union, with which he was close in his lifetime. And he passed Melrose Hotel, where for many years he lived a simple bachelor’s life.

As the cortege passed Gordon House, a great wail went up from some of the women mourners massed on the sidewalk. These were the heart cries of sorrow from a grief stricken nation that these emotional women were not ashamed to vent openly.

Then the scene shifted to George VI Memorial Park, now the national resting place of Prime Ministers as well as of National heroes. Crowds had already begun to converge there ahead of the procession and the mood of majesty was heightened by the firing of salute by the army - a salute of 56 guns at one minute intervals, as the body of Sir Donald moved slowly to the grave.

At the end of its one mile walk, which occupied a whole hour the cortege moved into the park. The casket was borne to a central position beneath the green willows. The scarlet-coated soldiers came to attention in hallowed ground. And the last sad, final rites of burial were said.

There was a kaleidoscope of colour in the park People streamed n from all directions in a mass of movement. Some climbed trees to get a better look. Men and women and children milled around, like a restless sea, as the voices of the ministers, strange and mechanical came over the loudspeakers, the prayerful phrases, sharp and clear above the movement and murmur of the crowd.

But after the Lord Bishop had pronounced the final benediction, and the body began to be lowered into the grave, a hush came over the huge, surging crowd. Like a plaintive wail, the low; mournful notes of the Last Post, came from the bugles. Repetitious and haunting, they roar and fell like waves of the sea at night on a lonely shore. The sun went under a cloud, and a cool wind of approaching evening fanned the hushed park.

And the restless ones were stilled in the hush and awe of the final, ultimate moment - the moment when the reality of death became certain, the moment when Donald Burns Sangster passed from mortal sight and the earth enfolded him in its cold embrace.

Then the wreath-laying was done - the last testimony of homage and love and respect for the man who served his country as a public man for 34 years, but held glittering prize of Prime Minister for less than a month. The final ceremonial lasted for as long as on hour, as thousands of wreaths were laid on the grave, from the highest citizens in the land of the humblest.

So Sir Donald Sangster, honoured in life and even more honoured in death, was left in a quiet garden of his own, in the shadow of the nation’s war memorials, where soon a mausoleum will mark his resting place in Jamaica’s new shrine of heroes.