Questions over the staging of Champs still present 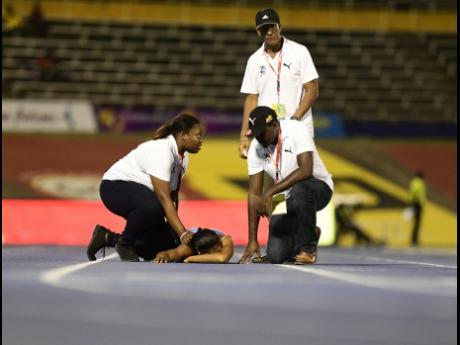 Gladstone Taylor/Multimedia Photo Editor
Bethany Bridge of Edwin Allen is attended to by medical personnel after suffering an injury, while competing in the 200m Class Two event at the ISSA/GraceKennedy Boys' and Girls’ Athletics Championships at the National Stadium on Thursday, March 28, 2019.

The decision to stage the Boys’ and Girls’ Athletics Championships at such a belated stage was never going to be easy. While many are looking forward to the return of the most impressive high school event in the world, there are a few who do not think the staging should happen. Do the voices of the few outweigh those of the many.

Experts outline health worry for athletes ahead of championships

Clarke, who has won championships with St Jago, Jamaica College and Calabar, is concerned that the fluctuation and inconsistency in training over the last two months will put the youngsters at greater risk of injuries than usual.

“It’s an unusual year. We started late, in November, and it has cost us somewhat. We are trying our best to do the things that will make us more competitive, and we have done what we have had to do,” Clarke told The Gleaner.

“But the main thing we are trying to avoid right now are injuries, which, under the present situation, they are all very vulnerable to,” he said.

Wright supports Clarke’s view and went further to state that staging the championships this year is a bad idea because of the possible threat to the longterm health of the young athletes.

“The incident of injuries should be increased. Now that a date has been set, the urge to get ready is going to increase the amount of work that needs to be done over a short period of time and therefore lead to the possibilities of injury while preparing and at the championships itself,” Wright said.

“Some of these athletes are not at optimum health based on t he asymptomatic nature of t he virus (coronavirus), and they too can be at risk of injury as well,” he added.

Wright suggests that coaches make a compromise and taper the training of the athletes in order to help preserve their health and limit their risk of going down with injury.

“Coaches have their training methods to get athletes to their peak, and they must be careful not to put them under too much extra stress. So that is a difficulty that the coach will have,” Wright reasoned.

The ISSA/Grace Kennedy Boys and Girls’ Athletics Championships was cancelled last year because of the coronavirus pandemic and was under great threat of not being staged for a second year running until recent confirmation that the event will be held at the National Stadium, May 11-15.

While track and field enthusiasts are celebrating the event’s approval, Wright thinks it was a huge mistake allowing the championships to go ahead.

He insists that without a bio-secure bubble, the championships’ participants will be at greater risk of contracting COVID-19, and he believes that cancelling the event this year would have been the more prudent decision.

“I am one of those, in conjunction with the head of the sports medicine department at the University (of the West Indies), who says that it is not a good idea to have the championships this year,” said Wright. “What we don’t want is to expose them to injuries and COVID-19 when we don’t know what the long-term effects (of COVID-19) on the human body are.”

“Younger people are getting more severe COVID-19 than we knew originally and in the US. We now see many young people in hospitals. I think it is a bad idea. We are playing with the future of our children, and I hope we do not live to regret it,” he added.