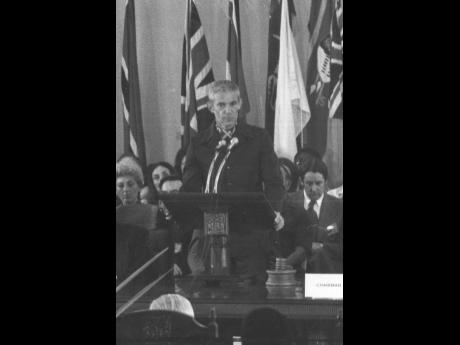 File
Prime Minister Michael Manley of Jamaica, chairman of the Commonwealth Heads of Government meeting, officially opening the 1975 conference at Jamaica Pegasus Hotel, New Kingston on April 29. Seen seated at left are Archbishop Makarios, President of Cyprus, and Commonwealth Secretary General, Mr. Arnold Smith, both of whom spoke at the opening session.

The charismatic fourth Prime Minister of Jamaica was most well known for his championship of the disenfranchised and the disadvantaged. Michael Manley wasn’t happy with trying to achieve change in the country he led though. Manley, in the way only he could, felt it necessary to spread the ‘gospel of socialism’ to the world.

PRIME MINISTER Michael Manley challenged the Commonwealth on April 29 to find a way between “dialogue and confrontation” in seeking to help establish a new chapter of history “on behalf of the disadvantaged of the world”.

In an opening speech, hailed as setting the tone of the Commonwealth Heads of Government Meeting, Mr. Manley explored aspects of the world economic crisis resulting in “wide disparities” which the Singapore Conference of 1971 had declared to be “too great to be tolerated.”

As Chairman of the first Commonwealth Summit to be held in the Caribbean the Prime Minister spoke from the plenary conference room of the Jamaica Pegasus Hotel before the assembled leaders of 900 million people and special guests at the opening ceremony.

Three other Government heads and the Commonwealth Secretary General shared the spotlight in the one-hour ceremony broadcast for the first time; and all welcomed Grenada a the newest member of the Commonwealth club.

Members of the Jamaican Parliament, leaders of commerce and industry, representatives of the professions and other prominent areas of Jamaican life were special guests at the opening ceremony.

The meeting began its work in an afternoon session devoted to subjects of functional co-operation and with announcements from Britain, Guyana, and Jamaica of substantially increased contributions to the Commonwealth Fund for Technical Cooperation.

Setting the stage for the talks which will last until next week Tuesday the Jamaican Prime Minister stated his challenge to the Commonwealth against a background of analysis embracing the almost complete process of decolonisation and what was now another crisis: “access to economic opportunity.”

He said that few considerations of political independence remain to divert attention from the true inner issue with which the world now had to wrestle: how to manage the distribution of the world's wealth.

It was an issue that had been recognised in the Declaration of Principles by the Singapore Heads of Government conference in 1971. The declaration was that the wide disparities of wealth existing between different sections of mankind were too great to be tolerated.

Proponents of a new world economic order were seeking to find techniques of political management of world trade and finance that would lead to the progressive elimination of those “wide disparities,” Mr. Manley said.

He went on to declare that the Third World “driven by its poverty and the inexorable workings of the free trade system' had to discover the “Producers Association” such as OPEC and the IBA, and they would never be dismantled.

“The choice therefore is inevitably between dialogue and confrontation. The challenge to this conference is to explore the ways and means by which the scales of probability may be tipped in favour of dialogue,” Mr. Manley said. With a call to collective action he stated the problem in these terms:

"during next week 900 million people will hope that we find a way. As we discuss the tons of sugar or bales of cotton which buy a tractor, I insist that we remember the human beings who depend upon the exchange. A house wife in America or Europe may be annoyed by the price of her lumps of sugar but the increment which irritates her may be saving the children of a million sugar workers from malnutrition if not starvation.

“It is this comparative experience which tells the true human story behind those “wide disparities”. It is a new chapter to that story with a new human outcome which we must now commence to write on behalf of the disadvantaged of the world," Mr. Manley said.

Mrs. Gandhi who spoke after the Secretary General praised the Chairman for his “words of wisdom” which she said had set the tone for the conference.

She saw the conference as following the Ottawa pattern. They would discuss some major issues and in fact what Mr. Manley had described as “the politics of change.”

Earlier in the history of the Commonwealth they had developed a common denominator and were unanimous in regarding racialism as a dangerous sickness.

They had developed a political commitment to racial equality “so we should now address ourselves to the issue of economic inequality and generate momentum for cooperative action.”

“This should be our task at this conference and future conferences of the Commonwealth. Today there is a demand for a more positive approach, more purposeful action and more tangible results. Past concepts and assumptions cannot meet the challenges of our new epoch.

“The Commonwealth must rise above all narrow considerations and give a bold lead in these matters.”

If we can make a small beginning I think the Commonwealth will have proved its worth.”

Archbishop Makarios dealt briefly with “the tragedy of Cyprus” as well as the Middle East crisis and Southern Africa. He said the Commonwealth had an obligation and duty to help the peoples of Africa to secure their legitimate rights.

The lesson to be learned from the various grave events and situations in the world was that “the United Nations must be unequivocably engaged in all international problems with the meaningful and genuine support of its members and especially of the great Powers.”

“I strongly believe,” the Archbishop said, “that the members of the Commonwealth, devoted to the cause of peace, have a paramount duty to strengthen the United Nations in its endeavours to ensure conditions of lasting peace in the world so that mankind may live without fear if it is to survive at all.”

The New Zealand Prime Minister Mr. Rowling also saw the need for a new world economic order as a focus for the discussions by the conference.

“Tomorrow it may well be the issue of freedom and liberty for the individual.” It was the task of the conference to meet each problem constructively, imaginatively and with determination.

Earlier the retiring Secretary General Mr. Arnold Smith had also given his own reviews of the world economic situation and declared that the Commonwealth was well equipped, if there was the political will, to give a lead to the international community “which must sooner, rather than later, deal with universal economic problems."

In the afternoon working session behind closed doors the Heads of Government dealt with “Inter - Commonwealth Relations and Commonwealth Functional Cooperation” withi Mr. Harold Wilson of Britain leading off the discussions.

Conference sources said that Mr. Wilson announced that Britain was increasing its contribution to the Commonwealth Fund for Technical Cooperation from 800,000 pounds to 1.65 million pounds in 1975-76.

Guyana and Jamaica are also increasing their contributions, Jamaica will double its contribution to 50,000 pounds.

The Heads gave their blessing to a proposal that will establish a division within the Secretariat to promote food production and rural development.

The proposal for a Commonwealth Investment Bank met with some reservations and has been referred to the Senior Officials for further study.

Today the meeting will move on to talks on “changing power relations and its economic and political consequence” with India and Singapore expecting to lead off the discussions.