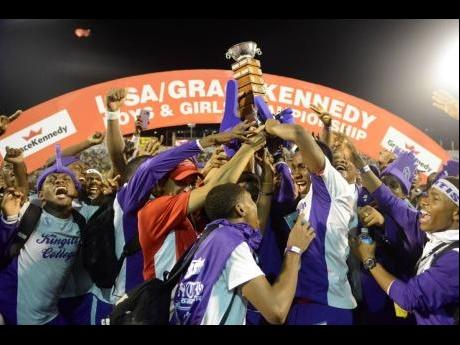 File
Don Wehby, Group CEO at GraceKennedy, is smothered by jubilant Kingston College athletes as he presents the Mortimer Geddes Trophy to the team after their success at the 2019 ISSA/GraceKennedy Boys and Girls’ Athletics Championships at the National Stadium on March 30, 2019. 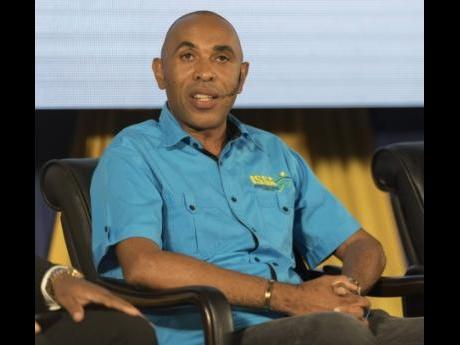 There was always going to be a significant hit taken by the organisers of the ISSA/GraceKennedy Boys' and Girls' Athletics Championships, given the no-fan status of the recently approved affair. But the figure of $45 million still comes as a shock and just goes to show how much of an impact on every area of Jamaican life COVID-19 has had.

THE INTER-SECONDARY Schools Sports Association (ISSA) could miss out on approximately $45 million in gate receipts at this year's ISSA/GraceKennedy Boys and Girls' Athletics Championships, which will be held without spectators at the National Stadium on May 11-15.

The organisation will also receive less sponsorship funds from its partners this year, with contracts being adjusted, given the circumstances and the limited entitlements and opportunities that ISSA can offer in the event's current execution plan.

'Champs', as it is called, will make a return this year after being cancelled in 2020 in response to Jamaica registering its first COVID-19 cases.

After much debate, the event, considered by many to be the best age-group athletics championship in the world, was approved by the Government to be staged, with the organisers developing a number of strict safety protocols in an effort to deliver a safe event.

Among those protocols is a ban on spectators, resulting in a significant loss of revenue for ISSA, with gate receipts contributing to 40 per cent of the organisation's revenue from Champs.

ISSA President Keith Wellington confirmed the fallout, which he expects will have a huge impact on the organisation's finances.

“Ticket prices vary every year, but you would not be sure what you would lose in terms of a dollar figure, maybe 40 per cent of our income comes from ticket prices,” Wellington told The Gleaner.

According to our information, ISSA received a combined $150 million in sponsorship dollars in 2019 and made in the region of $45 million from ticket sales.

Wellington, who did not confirm those numbers, stated that ISSA has made some adjustment to this year's execution budget for the championships and is also working alongside the various sponsors of the event to ensure that these financial losses will not severely affect its operations.

CHAMPS WITH NO FANS

Nevertheless, Wellington pointed out that the event's sponsors have continued to show their commitment to ISSA and the event, despite adjustments to their entitlements due to changes to the event's execution this year, as well as the harsh economic climate.

“This will run us millions of dollars of losses in gate receipts, but what we have done is try to adjust our budget, and we are trying to ensure that we come out with a balanced budget in terms of income,” Wellington added.

“This is not one of the years where we expect to have a surplus from Champs,” said Wellington.

“We have had to have discussions with our partners because, obviously, we can't deliver what they normally deliver, and they wouldn't be able to get the benefit that they normally get, and so we would have had to make adjustments to our agreement. I cannot say what those arrangements are because those are private arrangements, (but) all our sponsors are on board,” Wellington said.