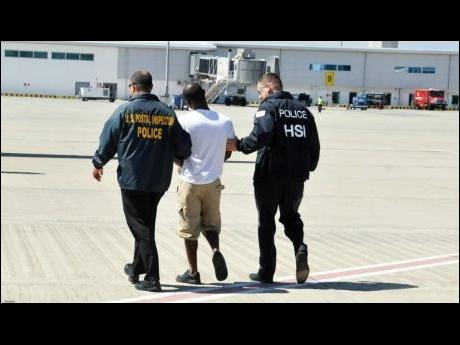 File
American law-enforcement officials escorting lotto scammer 28-year-old Davion Barrett of Norwood, St James, out of Jamaica in 2015. Barrett was the first Jamaican to be extradited to the US to answer charges related to the lottery scam.

Jamaica is struggling to handle a crime problem and now there is the added problem of having the United States pay specific attention to one of the areas the country seems to have excelled. The US now has particular players in the scamming 'industry' in its crosshairs but in so doing, have been alarmed at the connection between some members of the nation's security force and the practice.


DESCRIBING EXTRADITION as a powerful anti-crime tool, a senior United States law-enforcement official said that two Jamaican players in multimillion-dollar lottery scams were now involved court proceedings locally and could be sent abroad for trial in less than two months.

Already, one Jamaican has been extradited to the US this year to be tried for lottery scamming – a crime targeting mainly elderly Americans that is increasingly damaging the island nation's reputation.

The US Postal Inspection Service disclosed that several lottery scam masterminds in Jamaica were on its radar to face justice.

“We are actively investigating those persons. We will use all of the resources and the tools the US government have, whether through extradition or revoking visas or deporting persons involved in the crime. We are totally committed to stop this scourge from Jamaica,” Dominick Riley, country attaché for the US Postal Inspection Service, said in an interview with The Gleaner on Monday.

“There are people who are better scammers than others and they have insulated themselves by legitimising what they are doing by going into business so that they can hide their assets – we have active cases on a number of those persons,” the tough-talking US official said.

While Riley has praised the partnership between US and Jamaican law-enforcement agencies in the fight against lottery scamming, he raised concerns about the unseemly ties some police personnel had with the lottery scam underworld.

Investigations of local police are ongoing, said the country attaché, remarking that there were instances in which the Jamaican police have had “interactions with scammers or [were] involved in scamming”.

“I do remember that there was one police officer who was involved and we had a citizen who was murdered ... and he used her card. He was not involved in the scamming but he just used her card and he was prosecuted for that,” Riley said.

Riley warned that the expansion of lottery scamming threatened to tarnish Brand Jamaica and helped to compromise the nation's standing among international partners.

“The level and severity of scamming has a substantial negative impact on people's perception of Jamaica and the Jamaican people which hurts tourism and business in Jamaica,” Riley asserted.

The scammers operating at the highest levels have ploughed their ill-gotten gains into cash-based legitimate businesses such as the music industry, sale of automobiles and the opening up of bars, among other business activities.

Jamaica still remains on the European Union blacklist of countries whose regimes against money laundering, tax evasion, and terrorist financing were not considered robust enough.

Taking steps to get Jamaica removed from the blacklist, the Government had amended the Revenue Administration Act last year to improve transparency and to bring its tax and financial reporting requirements in line with the demands of the Organisation for Economic Cooperation and Development.

At the onset of the COVID-pandemic, there was a decrease in the incidence of lottery scamming. However, after the summer of 2020, US law enforcement said that scamming rebounded to pre-pandemic levels.

The inspection service averages about five extraditions annually, while other agencies are also executing multiple extraditions each year.