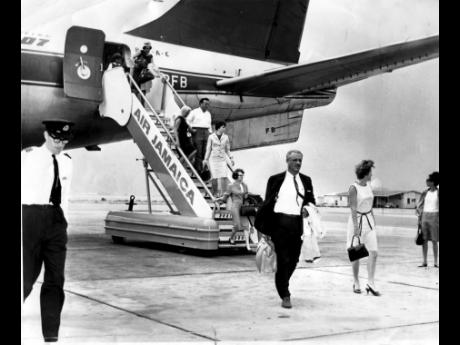 First flight passengers by Air Jamaica from New York landing at Palisadoes Airport on May 1, 1966. In front is Mr. George Samms, Kingston businessman who was among the many Jamaicans on the flight.

It was a heart-wrenching moment when the proud island of Jamaica had to come to grips with no longer having a national airline of its own. For almost all its independent life, the country had boasted of being among the few in the world to have its own airline. Here, The Gleaner, despite putting words on paper in black ink, bring to life, in vivid colour, the pride the country felt when three flights, two to, and one from, sparked an improved bridge between itself and the United States.

Jamaica took its place among the airline-operating nations of the world yesterday, when Air Jamaica, the national airline, started flying its first two routes between the island and the United States of America.

Three flights – one inward and two outward – marked the start of the airline's operation. The inward flight came from New York, and the two outward flights went to Miami and New York respectively.

Planes from the air fleets of British Overseas Airways Corporation and of British West Indies Airways, who are partners with the Government of Jamaica in the new airline, provided the service. They bore the name “Air Jamaica” in addition to their own companies' names and markings.

At Palisadoes Airport, the coming into being of Air Jamaica was made vividly real. Gleaming in blue-and-white, planes' steps marked “Air Jamaica” were wheeled out on the ramp and over the public-address system the name “Air Jamaica” took pride of place as passengers were called for its flights.

A ceremony to mark the inauguration of the airline was held at the airport at 11 a.m., to coincide with the departure of the first Air Jamaica – the BWIA-operated service to Miami, which left on schedule at 11.45 a.m. with a full complement of passengers.

The Hon. Donald Sangster, Acting Prime Minister, unfurled the flag of the airline – an attractive ensign in the colours of magenta, green and blue, with a golden sunburst and the words “Air Jamaica” also in gold to “speed it on its way”.

Chairman of the function was the Hon. G. Arthur Brown, Financial Secretary, who is chairman of Air Jamaica Ltd; and a major speech was made by the Hon. Cleve Lewis, Minister of Communications and Works, who told of the policy being carried out by the Government in the operation of the airline.

Congratulations to Air Jamaica were said on behalf of BOAC and BWIA.

An all-Jamaican crew flew the first flight, which left for Miami. Captain Herbert Steele was the pilot in charge, and assisting him were other Jamaican Pilots – Capt. Michael Guilfoyle and Capt. John Purohas, Stewardesses were Winsome Marrett, Joye Reid, Carol Chung, Carol Feurtado and Donna Fisher – all Jamaicans. There was one Jamaican Stewardess on the New York flight operated by BOAC. She was Claire Hendricks.

Leaving on the Miami flight were a number of Jamaicans, as well as visiting American tourists and businessmen returning home.

Members of a Jamaica Tourist Board promotion going to Canada also left on the Miami flight. They included The Caribs Orchestra from the Sheraton Kingston Hotel, and Mrs. Barbara LeWars, of the Board's staff.

Leaving on the New York flight was Sir Neville Ashenheim, Jamaica's Ambassador to the United States, who had been home on a business visit. He was accompanied by Lady Ashenheim. They had taken part, earlier, in the inaugural ceremony.

On the inward flight from New York to Jamaica were a number of Jamaicans, many of whom cancelled previous bookings on other airlines to fly with their own airline on its first flight, arriving at Palisadoes Airport on schedule at 2.10 p.m. Also on time, the outward flight left at 3 p.m.

Passengers as well as crew joined in expressions of delight at the start of operations of Air Jamaica.

“I am very pleased and happy to fly with Air Jamaica”, said Captain Steele, who comes from St. Ann's Bay. “This is something that I have been looking forward to for many years”.

“Fabulous!” was the word used by Stewardess Joye Reid, when asked how she felt to fly with Air Jamaica.

And Kingston businessman, Mr. George Samms, who came down on the flight from New York, said: “I feel proud”.

Joining in celebrating the start of operations of the airline were members of Government, members of the board of Air Jamaica, officials of BOAC and BWIA, leading citizens.

The band of the First Battalion, the Jamaica Regiment, played for the ceremony, and also entertained during the interval between the departure of the Miami flight and the arrival of the flight from New York.

Members of the crew of the Miami flight were presented to Mr. Sangster and Mr. Lewis. Mr. Lewis stayed on at the airport to welcome the New York flight. The crew on this flight was presented to him, and he had a special word of congratulation for Miss Hendricks.