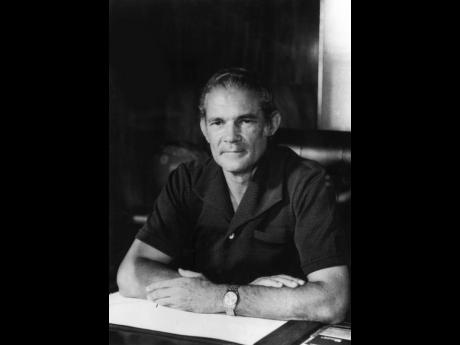 When Michael Manley became Jamaica's fourth Prime Minister, he promised to create, not just an equal-opportunity society, but one that took care of its most vulnerable. One area where the difference between 'the haves' and 'the have nots' was most palpable, was the are of education. Many could not afford the fees, let alone the cost of maintaining a child while they attended school. That was about to change. In 1973, when the prime minister announced free education, up to and including the tertiary level, juxtaposed with national service by graduates, the idea of equal opportunity seemed ever more real.

FREE SECONDARY EDUCATION in all grant-aided secondary schools and free university education for Jamaicans qualified for entry to the University of the West Indies were announced on May 2, 1973 by the Prime Minister, the Hon. Michael Manley.

In the climatic final section of a four-hour Budget Speech in the House of Representatives, the Prime Minister announced what he called a new watershed in the education system, to a tumult of Parliamentary cheers in the chamber of Gordon House.

Mr. Manley announced that beginning in September, this year, the Government had decided that the collection of tuition fees in the grant-aided Secondary Schools will cease.

Effective September 1974, all subsidiary school services such as Games, Home Economics, Drama Classes and the like will be available free of all children. Also in September, this year, because of the importance of higher skills and our determination to bring these skills within the reach of the poorest in the land," the Government will be making available free tuition for university education for all Jamaicans qualifying for and gaining entrance at the UWI.

By September this year. also, Government will provide free of cost, material for one school uniform for each child in Grade 1 (age 6) and Grade 2 (age 7).

By September, next year, all students in Primary and All-Age Schools will be provided with material for uniform free of cost. This will mean providing uniforms for 415,000 students.

In connection with the tree Secondary Education the Prime Minister said it was important to note that the 10/30 ratio as between Primary and Private Preparatory Schools will be maintained.

In making the announcement the Prime Minister said:

There was prolonged standing applause and ovation by Government members at the announcement by the Prime Minister.

Mr. Edwin Allen (JLP Northwest Clarendon), and former Minister of Education, walked across the floor and shook the hand of the Prime Minister. In the gallery there was cheering and dancing

Mr. Manley then said that once children reached 16 or 17 years, the Government would ask them to volunteer for National Service. They would be paid pocket money and would be asked to teach, he said.

A special committee will be set up and the Opposition, the teachers, the Jamaica Union of Students, employing bodies and others would be asked to assist in planning the implementation of the development, the Prime Minister said.

“I think it is the most exciting and challenging opportunity for Jamaica since Independence, something to stir the fire of Nationalism and Patriotism in your heart," Mr. Manley said.

“If a university student enters this year, it will be at the cost of the State, but at the end of the training, we will want them to come back and give two years' service.

“We say to university students if you volunteer, we will pay your fees but you must continue. If you don't want to volunteer you can continue on the same basis, no problem," the Prime Minister said.

In closing, the Prime Minister said: “Change is a matter of vision of justice and when you talk of change, what is the change? Let us speak of change. Labour Day was a change.

“The law to prevent non-Jamaicans owning your land is a change, the 18-year-old vote is a change, free education for the people is change, national service where we put back something is a change.

“The system by which we can achieve power for our people and freedom, that is a change: the means where people sacrifice now for a great tomorrow, where we will march together in the name of work, in the name of justice because the word is love.”